In the sixth month the angel Gabriel was sent from God to a city of Galilee named Nazareth, to a virgin betrothed to a man whose name was Joseph, of the house of David. And the virgin’s name was Mary.  And he came to her and said, “Greetings, O favored one, the Lord is with you!”  But she was greatly troubled at the saying, and tried to discern what sort of greeting this might be.  And the angel said to her, “Do not be afraid, Mary, for you have found favor with God.  And behold, you will conceive in your womb and bear a son, and you shall call his name Jesus.  He will be great and will be called the Son of the Most High. And the Lord God will give to him the throne of his father David, and he will reign over the house of Jacob forever, and of his kingdom there will be no end.” And Mary said to the angel, “How will this be, since I am a virgin?” And the angel answered her, “The Holy Spirit will come upon you, and the power of the Most High will overshadow you; therefore the child to be born will be called holy—the Son of God. And behold, your relative Elizabeth in her old age has also conceived a son, and this is the sixth month with her who was called barren. For nothing will be impossible with God.” And Mary said, “Behold, I am the servant of the Lord; let it be to me according to your word.” And the angel departed from her. 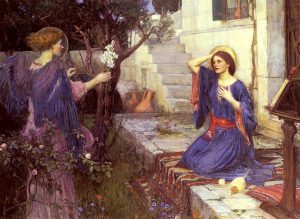 In the season of Advent, I often think about Mary. Perhaps its better to say I wonder about Mary.  This year I find myself wondering, especially, about the Annunciation.  I wonder what it must have felt like, what she might have been thinking, how she would pick up and carry on with her morning after the great Archangel departed. How would she explain it? How did it inform her experience of all the wonders that followed? What impact did it have on her understanding of God? Of faith? I also wonder what the Annunciation has to teach me about God. I wonder what it means for me in my own life of faith.

The announcement, or “Annunciation”, would have come in late March or early April by anyone’s best guess. Western church calendars observe it on March 25, right at the edge of seasons when the cold low light of winter begins to give way to the rising warmth of spring; right when the ground is beginning to thaw and plants start to bud; right when heifers and mares are growing thick with the young they are about to yield. Even in the Middle East, early spring is a season of anticipation.

As a newly betrothed young woman, I suspect by that point Mary, too, was well-steeped in her own season of anticipation: making arrangements for a wedding, preparing garments, imagining and planning for a new home, faithfully working in her own small way to honor her parent’s negotiations about dates and a dowry and all the rest.

Thinking about The Annunciation in this context suggests there was a particular kindness in preparing Mary for the news she was to receive. Her soul was allowed to bend itself naturally toward expectation well before Gabriel arrived. Her eyes were already widening toward a more dynamic future, toward imagination, toward the unknown simply by living the life she had already been given.

In my own life I have known a handful of instances when the Holy Spirit has made “announcements” to me about my own life. These aren’t words of encouragement, or words of scripture, or guidance as have also (at times) been given, but simple declarations much like his word to Mary when He said: “You will bear a son by me”.  Its notable that there isn’t much dialogue in the Annunciation. The plot is simply that God delivers a message to Mary, she clarifies and accepts.  The annunciation gives us a category for God speaking in “FYI”.

What strikes me most perhaps, is what a beautiful picture the Annunciation is of someone who already belongs to the Lord simply yielding to the fact that she does. She is rightly terrified by the angel and his fearsome news, but she clearly has a category for God doing things in her life (and the lives of others) that falls outside her reason and experience.  She clearly knows and trusts that God is good. The longer I sit with it, I think it is Mary’s confidence in the love and goodness of God that is so remarkable in this story. Because of that raw confidence, she is no more surprised by a virgin conceiving by the Holy Spirit than she is that God would love her and find favor with her though both are, in fact, terrifying.

This beautiful poem by Marie Howe (which I recommend you listen to as well by clicking below) titled Annunciation has been a source of lovely meditation about Mary’s experience at the Annunciation as an experience of God’s love. I commend it to you for your own Advent season with the hope that it evokes in you the same wonder and awe of God as it does for me each time I listen.

Even if I don’t see it again—nor ever feel it
I know it is—and that if once it hailed me
it ever does—
And so it is myself I want to turn in that direction
not as towards a place, but it was a tilting
within myself,
as one turns a mirror to flash the light to where
it isn’t—I was blinded like that—and swam
in what shone at me
only able to endure it by being no one and so
specifically myself I thought I’d die
from being loved like that.