This reflection is part of our “Discernment: Hearing God in a Noisy World“ Series.  Discerning God’s unique voice is one of the most important skills for a Christian and is absolutely crucial for our intimacy with God and our ability to follow him.  Unfortunately, our world is engineered to prevent us from cultivating the skill of discernment.  Because of these realities, we will be offering a series of resources, reflections, and programs throughout the year to help all of us learn to better recognize and respond to God’s unique voice.  We hope you’ll join us along the way! 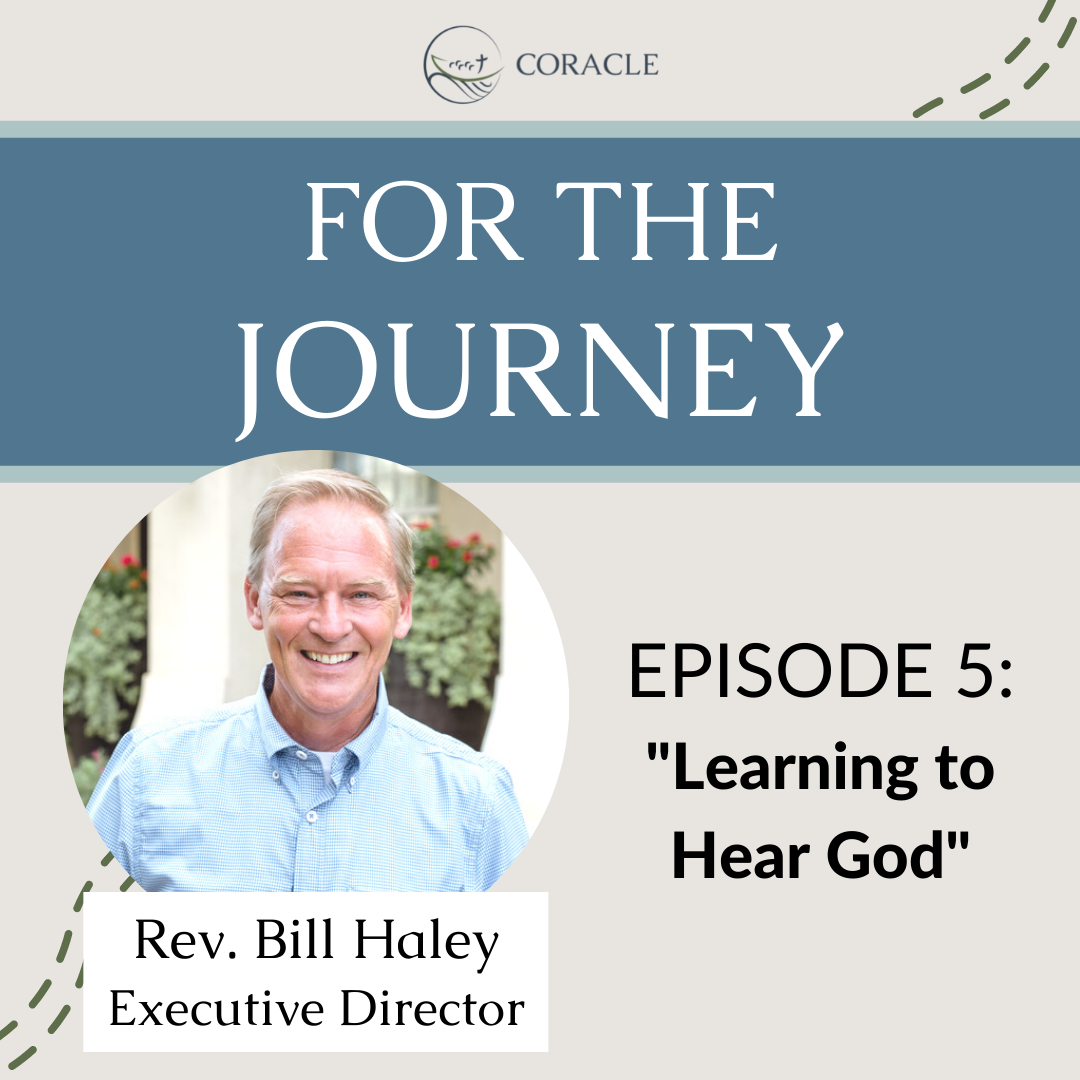 **This is the adapted transcript of a sermon given in 2016.  If you would prefer to listen to the audio from the sermon, you can do that HERE or by clicking on the image.**

To be a person of discernment is to be a person who has become adept at hearing God.  This is easier at some times than others!

Peter Marshall was one of the most acclaimed ministers in the United States in the middle of the twentieth century.  He was a great preacher and particularly well known for being the long-term chaplain of the United States Senate.  Dallas Willard tells a story about him in his book Hearing God: Developing a Conversational Relationship with God.  Marshall was Scottish, and he happened to be back in the United Kingdom:

One foggy, pitch-black Northumberland night, he was taking a shortcut across the moors in an area where there was a deep, deserted limestone quarry.  As he plodded blindly forward, an urgent voice called out, “Peter!”  He stopped and answered: “Yes, who is it?  What do you want?”  But there was no response.

Thinking he was mistaken, he took a few more steps.  The voice came again, even more urgently, “Peter!”  At this he stopped again and, trying to peer into the darkness, stumbled forward and fell to his knees.  Putting down his hand to brace himself, he found nothing there.  As he felt around in a semicircle he discovered that he was right on the brink of the abandoned quarry, where one step more would certainly have killed him.

Wouldn’t it be great if we could hear God clearly like that all the time?   Most of us would like that.  It would make hearing God a lot easier if, well, I could hear him like that.

If you’re reading this, here’s something I’m assuming about you.  You want to hear God.  You ask questions like, how can I know God’s will, or how can I know what God is saying to me?  While these might be some of our most vexing questions, they’re also just gorgeous, because they come from a true love for God, a real desire to do his will.

It’s probably also true, though, that this topic of hearing God is one that is characterized not only by longing, but also by confusion, and some really legitimate questions.  So let me ask a few of them:

Many of us can find ourselves in many of those questions.  It takes time to learn and to figure out how God speaks so that we can begin hearing his voice.

Being able to confidently hear God’s voice leads to a whole other relationship with God, so much more than merely a relationship characterized by master and servant.  Far better is the language of the relationship between a loving father and child.  Even better than that is the language of relationship that Jesus gave us in John 15:15.  “No longer do I call you servants, for the servant does not know what his master is doing; but I have called you friends, for all that I have heard from my Father I have made known to you.”

Taking these two images together, Dallas Willard writes, “The biblical record always presents the relationship between God and the believer as more like a friendship or family tie than like merely one person’s arranging to take care of the needs of another.”

And there’s another sort of relationship that happens when we have learned how to hear God and make hearing his voice a lifestyle.  This is from Oswald Chambers:

Get into the habit of saying, “Speak, Lord” and life will become a romance (1 Samuel 3:9).  Every time circumstances press in on you, say, “Speak, Lord” and make time to listen… As we listen, our ears become more sensitive, and like Jesus, we will hear God all the time.

What a promise, a life with God like a romance!  And what an invitation–hearing God like Jesus.

So it’s worth taking the time to really dive into learning as much as we can about hearing God.  This is not so much for the sake of learning and the accumulation of knowledge but rather so that each of us can claim this promise all the more and live into that invitation.  If hearing God is confusing for us then we want to move past the confusion so that we can say yes to the invitation.

Dallas Willard opens his book with this conviction: “I continue to believe that people are meant to live in an ongoing conversation with God, speaking and being spoken to.”

From the back cover of Hearing God, “In this book, Dallas provides rich spiritual insight into how we can hear God’s voice clearly and develop an intimate partnership with him in the work of his kingdom.”   There is the link between prayer and action, between spiritual formation and the Kingdom.  We are learning to hear God’s voice so that we can partner with him for his kingdom work in the world.

There are so many good sections and insights in the book, and so much interaction with Scripture.  One of my favorite sections is where he goes through the six ways God spoke to people in the Bible.

Of this list of six ways that God speaks to people in the Bible, here’s the line from Willard that I love. It’s so encouraging:

Perhaps the first thing to say [about this list] is that there is no foundation in Scripture, in reason, or in the very nature of things why any or all of these types of experience might not be used by God today [emphasis in original].

There are a couple of huge basic affirmations here:

Considering these affirmations, we sometimes find it hard to hear God because we expect that he’ll speak in one way and listen very intently for that tone of voice or that way of communication, when in fact he may be speaking to us in another way.  Because we’re practicing selective listening, we don’t hear him, and we might be tempted to think he’s not speaking, even when he is!

A dear friend of John Yates’ and mine was once involved in a serious dating relationship that was moving with lightning speed toward marriage, but neither of us knew about this relationship until after it had broken up.  I was close enough to this person to share that I was surprised that we hadn’t heard about it, so I asked, “Why didn’t you tell us?”  And he said, “Because I knew what you guys would say!”  Had he come to John and me about the wisdom of this relationship, we might have been able to share our concerns.  But he didn’t want to hear those concerns, so he closed himself off to one way God could have spoken to him.  Sometimes we don’t hear God because we expect him to speak in one way, when he is actually speaking in another.

As we continue to dive more deeply into how we hear God, we want to start with some basic truths and fundamental principles, and let one of the most beloved stories in the Old Testament give them to us, the story of Eli and Samuel found in 1 Samuel 3.  (You may want to pause reading this article here and read that chapter)

The context is that Israel has been through the Exodus and the wilderness, and has inherited the Promised Land.  They were governed for a long season by judges, and the last judge, Samuel, enters the scene now as a little boy.

Samuel had an unusual birth.  He was the direct answer to his mother’s prayer and was given in service to God.  So he grew up in Shiloh near the tabernacle, the precursor to the temple, where God’s presence dwelt, and he was raised by the priest, Eli.

After some years recounted in 1 Samuel 2, chapter 3:1 picks up the story.  “Now the boy Samuel was ministering to the Lord in the presence of Eli.  And the word of the Lord was rare in those days; there was no frequent vision.”

But then God breaks his silence and speaks audibly to Samuel, now a young man, who is in the temple.  Samuel thinks it’s Eli, so he runs to Eli, says “Here I am,” and Eli says “I didn’t call you.  Go back to sleep.”  The same thing happens again.  Finally, a third time, God calls again, Samuel runs to Eli again, and Eli finally understands that it’s God’s voice calling Samuel, and Eli says something different this time, beginning in verse 9:

Therefore Eli said to Samuel, “Go, lie down, and if he calls you, you shall say, ‘Speak, Lord, for your servant hears.’”  So Samuel went and lay down in his place.  And the Lord came and stood, calling as at other times, “Samuel! Samuel!”  And Samuel said, “Speak, for your servant hears.”  Then the Lord said to Samuel, “Behold, I am about to do a thing in Israel at which the two ears of everyone who hears it will tingle.”

From a master and servant…

To a loving father and a beloved son or daughter…

From a cherished friendship…

To a thrilling romance.

“SOUNDINGS” posts consider topics that are important for our society, for the Church, and for our own spiritual journeys.  To ‘take a sounding’ is a nautical term about using depth to determine where you are and where you’re going.  These writings are designed to do just that.  Please share this post with friends you think might appreciate it.  If you would like to get SOUNDINGS posts from me sent directly to your inbox, click here.
Share this post
← Remember that You Are Dust A Tool for Discernment →