“It was not a silent night.”  I still remember the moment I first heard those words.  I was at a fundraising concert for a local non-profit and a young female singer-songwriter with a voice like glass opened her set with those words from Andrew Peterson’s song “Labor of Love.”  I was transfixed, transported.  It was a transcendent moment.  For the next 4 minutes, as I watched snow fall outside the windows of the church (yes, it was that perfect of a “Christmas moment” with a snowstorm outside!), it was like I was hearing the story for the first time.  That song that night ushered me into a deeper space of adoration for this God incarnate. 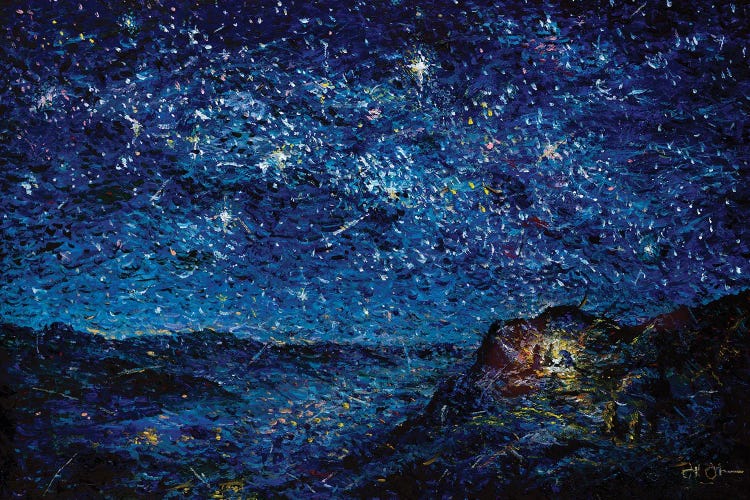 “Night of the Nativity” by Jeff Johnson

Of course I grew up, like all of us, singing the very opposite, and as a child there was something about the silence of the night that helped me imagine it as a holy night.  But between childhood and adulthood, a lot of water passes under the bridge.  By the time I heard the words “it was not a silent night” I was ready for a less idyllic, more empathetic, vision of the story.  Context matters.

I began this season thinking a lot about the role of Adoration in the New Testament portrait of the original Advent.  I have been moved by an awareness that the stories of nearly every character in the Nativity (i.e. Zachariah, Elizabeth, Mary, the Angels, Shepherds, Simeon, and Anna) find their culminating moment in a flourish of adoration.  But as the season continued, my own context changed, and this last week instead of the “praising/glorifying” passages I found myself drawn to the context that precedes those key moments.

For instance, Zachariah is described as “Terrified” and “overwhelmed with fear,” expressing doubt through sentences like “how will I know.”  Elizabeth notes her own context as one of “disgrace,” and Mary is introduced as being “perplexed” (Some translations read “confused and disturbed”).  To understand why my own gaze recently shifted it is helpful to note my own context.

I have spent this most recent week of Advent back in my hometown visiting with my father who has been diagnosed with Leukemia.  Since diagnosis, which came with a 6-9 month life expectancy, seven months have passed.

On Sunday, my Father and I attended what is likely our last church service together.  The service was built around the familiar passage from Isaiah 9:

The people walking in darkness have seen a great light;
on those living in the land of the shadow of death, a light has dawned.

Those words, “living in the land of the shadow of death,” rang in my ears as I sat next to my dying father.  The moment was not lost on either of us.  My father had come to faith late in life, after what could be considered a pretty checkered past.  The sanctuary we sat in was the very sanctuary that, fifteen years earlier, my father gave me one of the great honors of my life– the honor of baptizing him.

Over the course of this last week with him, I have been amazed at the level of peace with which my dad is, at this time, facing his impending death.  As we sat in that sanctuary on Sunday, under the words “those living in the land of the shadow of death” I realized that he has now given me a second great honor– the ability to witness in real-time what it means for those of us in the shadowlands to see that “a light has dawned.”

Art has a way of allowing us to experience a paradox before our desire to analyze it causes its truth to slip through our fingers.  Years ago as I heard the lyrics to “Labor of Love” for the first time, I experienced a truth that only now, after witnessing my father’s peace amidst death, am I beginning to comprehend more fully.  The kind of adoration that marks every character that encounters Jesus, does not occur in a context where “all is calm, all is bright.”  Peterson’s lyrics paint an image that is much more faithful to the fear, doubt, anxiety, confusion, and disgrace that animates the shadowlands in which we live.

It was not a silent night, there was blood on the ground, you could hear a woman cry in the alleyways that night on the streets of David’s town, and the stable was not clean and the cobblestones were cold and little Mary full of grace with the tears upon her face had no mother’s hand to hold.

It can be argued that, after two thousand years, Advent represents a pretty slow dawn. What this last week with my dad testified to me is that, slow or not, for “those dwelling in the land of the shadow of death a light has dawned.”