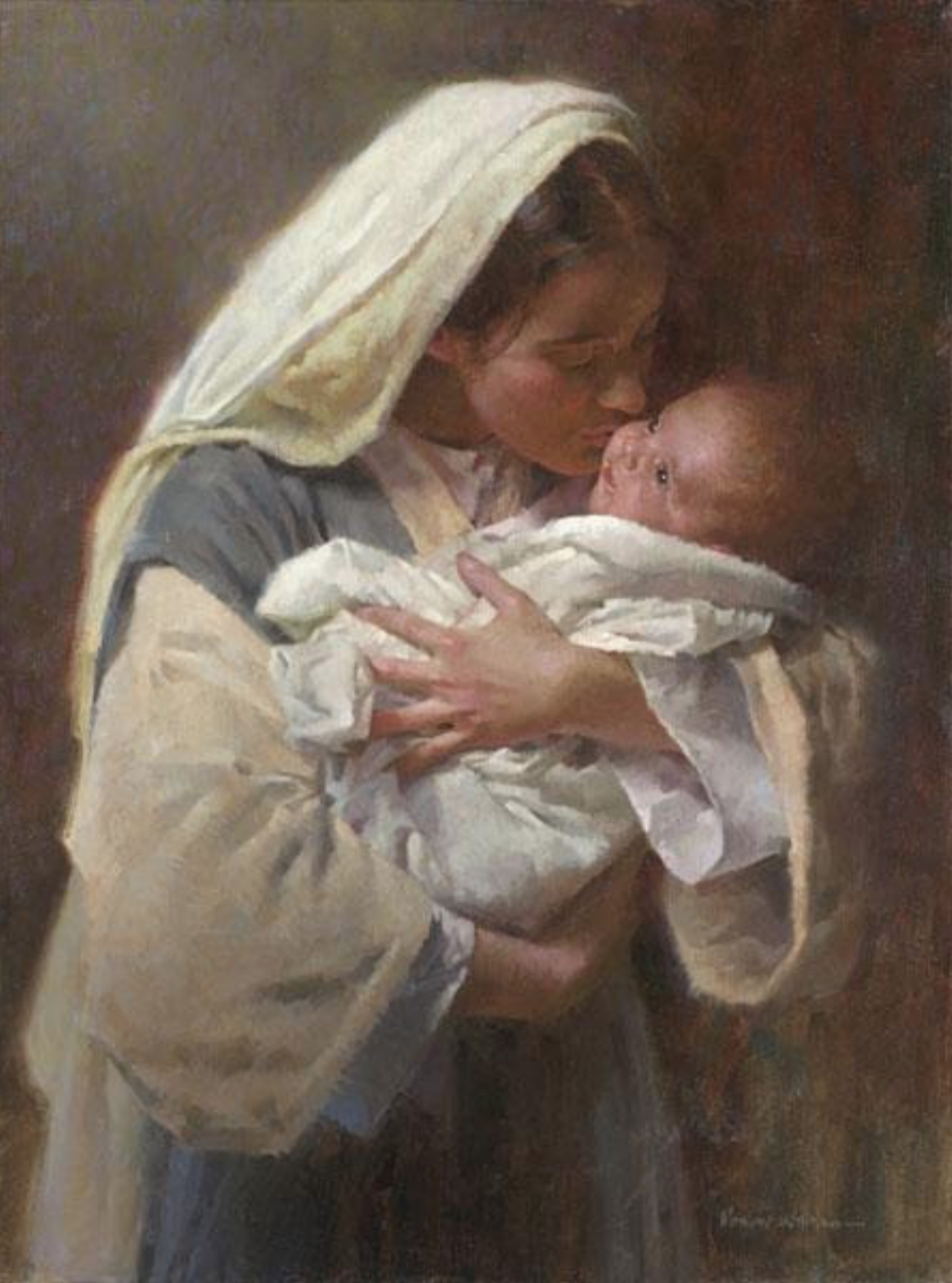 “Kissing the Face of God” by Morgan Weistling

I carry many magical childhood memories of anticipating Christmas.  As I’ve grown older, married, had children of my own, and now grandchildren, my wonder has only increased.  I resonate with Mary’s pondering what is impossible for her to comprehend, that she would be chosen to carry and give birth to the very Son of God.

I’m captivated by Bernard of Clairvaux’s recognition that Jesus comes in three movements.

He came in history to Bethlehem over 2,000 years ago.

“He slipped into our world through the backroads and outlying districts of one of the least important places on earth . . .  He lived for thirty years among socially insignificant members of a negligible nation– though one with a rich tradition of divine covenant and interaction.  He grew up in the home of a carpenter… After his father, Joseph, died he became ‘the man of the house’ and helped his mother raise the rest of the family.  He was an ordinary workman:  a ‘blue-collar’ worker.  He did all this to be with us, to be one of us, to ‘arrange for the delivery’ of his life to us.”
Dallas Willard, Divine Conspiracy, pp. 13-14

He is coming at the end of the age in glory and majesty to set all things right fulfilling the longing of all our souls.

And because He came, he is now able to come to us daily.

Remembering that it happened once,
We cannot turn away the thought,
As we go out, cold, to our barns
Toward the long night’s end, that we
Ourselves are living in the world
It happened in when it first happened,
That we ourselves, opening a stall
(A latch thrown open countless times
Before), might find them breathing there,
Foreknown: the Child bedded in straw,
The mother kneeling over Him,
The husband standing in belief
He scarcely can believe, in light
That lights them from no source we see,
An April morning’s light, the air
Around them joyful as a choir.
We stand with one hand on the door,
Looking into another world
That is this world, the pale daylight
Coming just as before, our chores
To do, the cattle all awake,
Our own frozen breath hanging
In front of us; and we are here
As we have never been before,
Sighted as not before, our place
Holy, although we knew it not.

“Remembering that it Happened Once…”
Wendell Berry, Sabbath Poems, 1987

As I ponder the mystery of God coming close this advent, I marvel that these three movements are true of my own life.  With hindsight, I now recognize He came to me as a 10 or 11-year-old performing in a brass ensemble with my Dad for a candlelight Christmas Eve service, before I understood what His coming “meant.”

He came as my wife and I anticipated the birth of our second child at Christmas time in 1988 only to have her wait to arrive on Epiphany.

He came as I spent Christmas with a dear Muslim friend in Indonesia away from my family in 1997.

He came as my daughters and I treasured our last days with their mother and my wife, our beloved Peggy, in 2013.

He came as we gathered for our first Coracle Advent retreat in Baltimore three years later, on the anniversary of her homegoing.

He came as we awaited the arrival of my first grandson in 2018.

And He comes!  This year has already been pregnant with gifts I can apprehend but not comprehend.  Phil Wickham’s “The Face of God” paired with Morgan Weistling’s painting “Kissing the Face of God” have become numinous invitations into His presence lovingly enfolding me.

And I delight in the assurance that He is coming.  That in His presence I will know shalom and love free of shame and fear and anxiety along with all those who share my delight in His coming, those I’ve known and loved, and those I’ve yet to meet.

Oh, Jesus grant us the capacity to continue to attune to Your coming– past, future, and present.  We cry with all the saints, Maranatha– Come, Lord Jesus.