The Disciples were in a rut.  A week ago, they had been left on a hillside, stiff-necked and gawking into an empty sky after their Lord was taken up from among them to heaven.  Before he left, Jesus had once again shattered all their paradigms.

Following the Resurrection, the disciples got to spend several miraculous weeks with Jesus, once again sitting at his feet and learning many “things concerning the kingdom of God” (Acts 1:3).  Understandably, the disciples thought they had finally cracked the code.  They could read the room– their friend/Rabbi/Lord Jesus had just triumphed over death and kept talking about the kingdom of God coming soon and instructing them to wait for his signal in Jerusalem.  Their conclusion:  now, finally, Jesus would “restore the kingdom to Israel” and overthrow the Roman occupation.

That old mental rut, the longed-for violent vindication of God’s remnant after centuries of brutal oppression and marginalization.  When they ask Jesus to confirm their suspicions, he instead leaves them with this cryptic remark, which turned out to be his final words to them (Acts 1:7-8):

“You don’t get to know the time.  Timing is the Father’s business.  What you’ll get is the Holy Spirit.  And when the Holy Spirit comes on you, you will be able to be my witnesses in Jerusalem, all over Judea and Samaria, even to the ends of the world.”

To their credit, despite their likely many questions, the disciples obey Jesus’ instructions to wait in Jerusalem.  They remain together, men and women from all different backgrounds, “constantly in prayer,” for at least a week.  Nothing.  No signs.  No cracks in the system.  No wars or rumors of wars.

All they would have seen is what they would have expected to see– thousands of fellow Jews arriving in Jerusalem from across the ancient world in time for the Feast of Weeks, or Shavuot.  Celebrated on the 50th day after Passover, this pilgrimage feast commemorated God’s gift of the Law to Moses on Mt. Sinai, a gift that formed a new kind of community on the earth.

When the Feast of Pentecost came, they were all together in one place. Without warning there was a sound like a strong wind, gale force—no one could tell where it came from. It filled the whole building. Then, like a wildfire, the Holy Spirit spread through their ranks, and they started speaking in a number of different languages as the Spirit prompted them.

There were many Jews staying in Jerusalem just then, devout pilgrims from all over the world. When they heard the sound, they came on the run. Then when they heard, one after another, their own mother tongues being spoken, they were blown away. They couldn’t for the life of them figure out what was going on, and kept saying, “Aren’t these all Galileans? How come we’re hearing them talk in our various mother tongues?

Parthians, Medes, and Elamites;
Visitors from Mesopotamia, Judea, and Cappadocia,
Pontus and Asia, Phrygia and Pamphylia,
Egypt and the parts of Libya belonging to Cyrene;
Immigrants from Rome, both Jews and proselytes;
Even Cretans and Arabs!

Their heads were spinning; they couldn’t make head or tail of any of it. They talked back and forth, confused: “What’s going on here?” 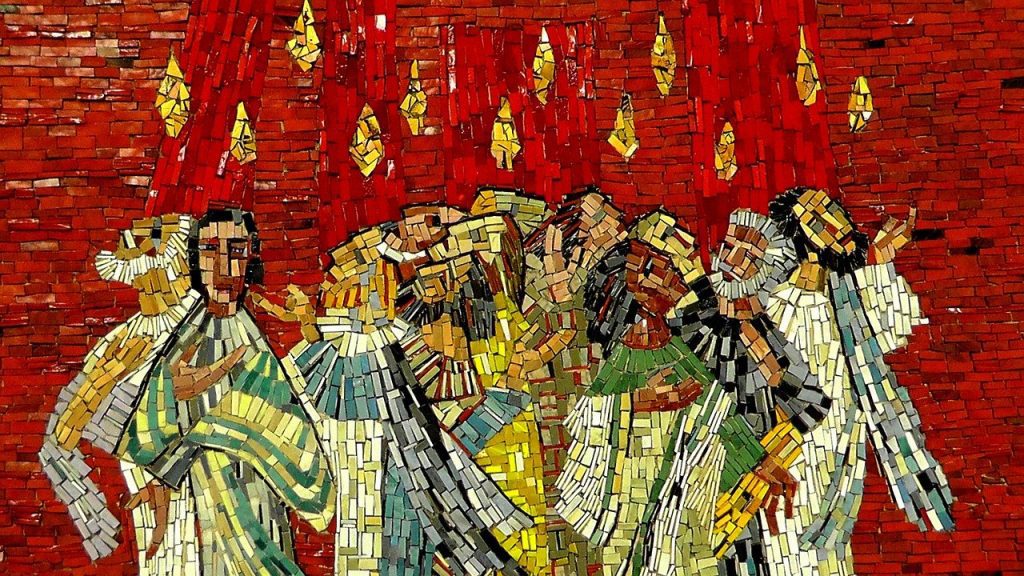 I love how Peterson’s paraphrase captures the shock-and-awe of the situation.  Everything is thrown off-kilter as the promised Holy Spirit arrives.  Wind whipping.  Fire roaring.  Tongues loosened.  Heads spinning.  The Church is born!

Notably, this new community of new creations (2 Cor 5:17) does not come into being as a conquering army empowered to dominate and coerce.  Instead, we meet a perplexing community of witnesses empowered to testify to the whole world, by word and deed, the reality of a crucified and risen Jesus– the incarnation of the God of love who is able to save to the uttermost all those who trust him with their lives (Heb 7:25).

This Pentecost, as we emerge from over a year of dislocation, anxiety, and fracture, I’ve been asking myself a few questions that I invite you to consider along with me:

Poetry is often a good place to start with the last question, so I will leave you with this from Malcolm Guite’s excellent book, Sounding the Seasons:

Today we feel the wind beneath our wings,
Today the hidden fountain flows and plays,
Today the church draws breath at last and sings,
As every flame becomes a tongue of praise.
This is the feast of Fire, Air, and Water
Poured out and breathed and kindled into Earth.
The Earth herself awakens to her maker
And is translated out of death to birth.
The right words come today in their right order
And every word spells freedom and release
Today the gospel crosses every border
All tongues are loosened by the Prince of Peace
Today the lost are found in His translation.
Whose mother tongue is Love in every nation.