The Liturgy of a Protest March

The Liturgy of a Protest March

On Friday, August 31st, Bill Haley and I had the opportunity to join around 120 pastors, ministry leaders, and laypeople to walk the 9 miles from Old Town Alexandria to Black Lives Matter Plaza out in front of the White House as part of Walk the Walk 2020.  Bill has already written a helpful overview of the day and why he chose to participate in it. 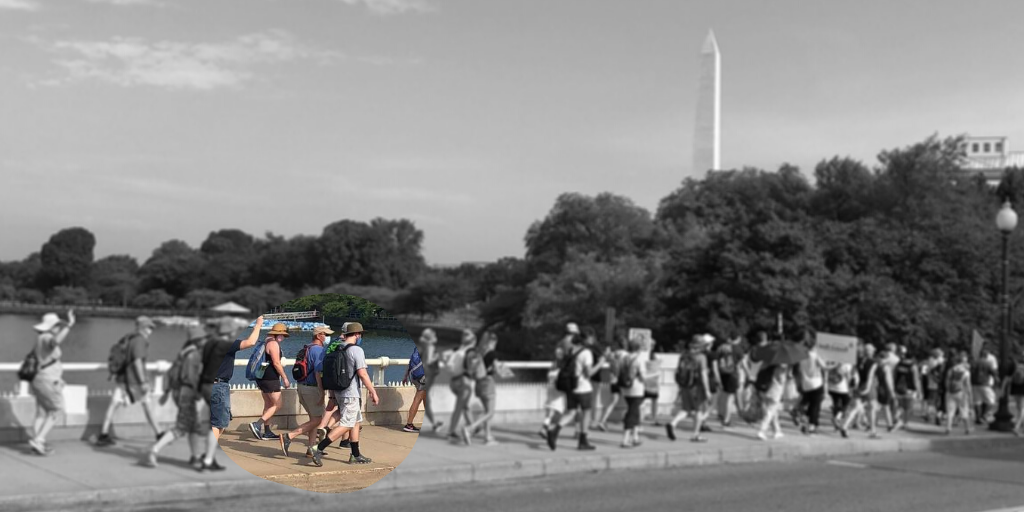 This was my first protest march, and I must admit I felt uncomfortable in the unfamiliar role of “marcher.”  I was acutely aware of my own awkwardness throughout the morning, and this discomfort spurred me to look more closely at why I struggled to inhabit this new role.  As I came to see, marching has a particular set of rhythms, practices, and postures that help to form someone into a marcher.  Marches have liturgies.

In his well-known book, Desiring the Kingdom, James KA Smith observes:  “Liturgies– whether ‘sacred’ or ‘secular’– shape and constitute our identities by forming our most fundamental desires and our most basic attunement to the world.”  They train “our hearts through our bodies,” teaching us through rituals and habit-forming practices “to be a certain kind of person.”  I would like to share three aspects of the liturgy of a march that I observed– three ways I saw the march pushing against my own self-centeredness as I walked.

It was Friday morning at the end of a busy work-week, and the sun had not yet risen.  I was rummaging around my apartment, groggily getting dressed, assembling a bag lunch, and trying not to wake my wife.  There had been numerous points throughout the preceding days when I had weighed whether or not this march would be “worth it” given the “sacrifice” of a few hours’ sleep and half a workday.  Honestly, had I not already told Bill I would see him there, who knows what I would have done with my morning.

I fear I have only grown more secure in my idolization of comfort throughout this year of quarantines and social distancing measures.  As our church has started to gather in person again on Sundays, I have found it very tempting to justify continuing to stay home.  Sensible rationalizations abound– general health risks, the distraction and discomfort of wearing something on your face for extended periods, the bummer of not being able to sing or take communion– but as I examine my own heart and motives, I fear those rationalizations are only masking (couldn’t resist) a deeper desire to remain in my PJ’s and not be forced to interact with people I might not know very well.  Over this season, I have forgotten some of the joy I used to take in waking up earlier than I might on a Sunday, getting dressed up, and going to be with and worship with God’s people.

Having the opportunity to gather together with a group of men and women united by a common cause, getting to hear scripture, testimonies, and poetry, praying together for God to be present to us and to those with whom we would interact– all as the rising sun inflamed whisps of cloud over the Potomac River– made the early start all the sweeter for the small discomforts it had “cost” me.  It reminded me that sacrificing a morning to be in communion with others (in-person whenever possible) is not a sacrifice at all, but a gift calling me out of my love of comfort and into a closer relationship with God through closeness with those who bear His image.

After the brief morning service, we hit the trail.  This part of the day was not a sacrifice for me.  I love a good walk, and the 9-mile stretch along the Mount Vernon Trail into DC certainly qualifies.  I soon noticed, however, that being a part of a march is rather different than a solo-hike.  Marches have a clear and steady pace, typically not set by the most avid hiker in the group.  While on a solo-hike I typically try to get from point-A to point-B as quickly as I can, I found this was not the point of a march.  Instead, to march is to cover ground together, to move through public spaces as a recognizable body of people.

This requires two things:  communal submission and accommodation.  The march leaders set a steady pace, and my feet were forced to submit to it if I wanted to remain a part of the march.  And, because our group spanned the age spectrum from teenagers to their grandparents, the pace had to be on the slower side to ensure everyone could remain together as the miles stretched on.

The Christian life is full of calls for submission and accommodation. Fundamentally, though, we are called to submit:

This submission is essential for fostering our own individual relationships with God, and it makes possible the formation of a people, a “body” of believers, made distinctive by their shared submissions and able to march through centuries and across cultures together.  Especially at the level of the local church, accommodating the wide spectrum of personalities, backgrounds, and levels of spiritual maturity is crucial for maintaining the unity we are called to embody (Jn 17; 1 Cor 8, 12:12-31).  This season has given the church lots of practice at accommodation, but it has also revealed how firmly many of us (American Protestants especially) cling to our felt right to “normalcy” when we are asked to change our patterns of life to accommodate those who are more vulnerable in our communities.

Every time I found myself marching behind a slower walker, my first desire was to dart around them so I could get back to walking at “my pace.”  In that desire, I recognized a deeply-rooted lone-ranger tendency I have written about previously.  I had to remind myself that my submission to the accommodating pace set by others was integral to remaining part of the march.  So too, our collective submission to God and His story-formed community– marked by loving accommodation– is integral to remaining part of Christ’s Bride.

As we marched through more densely populated areas, Shane Claiborne would lead us in a variety of chants by which we stated clearly why we were all there– Justice, solidarity, peace, Black lives mattering.  Not being a terribly vocal or out-front personality, much of this aspect of the day did not come naturally to me.  However, at one point, Shane slowed down to tell the stories of Black men and women killed before their time.  Some were names associated with recent tragedies, but the names spanned generations, giving a strong sense that these were not isolated incidents but the bitter fruit of a centuries-long story of injustice.  Especially resonant was the memory of Emmitt Till, the 14-year old boy who had been brutally lynched on that day 65 years ago.

After each story, Shane would begin a chant where he would call out, “Say his name!” and we would respond, “Emmett Till!”  This would be repeated around ten times for each name, and every time we repeated the cycle of names, I was floored by the depth with which this very simple exercise impressed itself on my imagination and soul.  Repeating the names drew me into a posture of active remembrance.  The full personality behind each name– woven into the fabric of families and communities now torn-asunder, bearing the priceless image of God– came home in a way that no amount of articles or videos had managed.

When something is of great value to a gathered people, it is good to bring that thing into active, shared remembrance by saying it out loud, over and over.  This is why many Christian traditions repeat creeds and prayers every time they gather– to remind us who God is, who we are, and how we are to live with God in the world.

I was humbled and moved by this particular “creed” of our march.  I pray my participation in that creed will help me be more attentive to the creeds I repeat more regularly and will help me look with more compassion on other marching creeds as I encounter them.

The liturgy of the march drew me out of myself– my well-curated comfort-zone, my tendencies for wanting things to be done on my terms, my ability to screen-out the experiences of communities of which I am not a part– and drew me towards a richer appreciation of what it means to be part of a body of people unified around a vision bigger than each individual.  More importantly, it drew me closer to the heart of God, who loves justice and consistently speaks and acts to give voice and bring restoration to the disinherited, all of whom bear his Image of infinite worth.

As you survey your life, what liturgies are you participating in, and how are they training your heart through your body?