Protests, Pandemics, and the Trinity

Protests, Pandemics, and the Trinity

“Then God said, ‘Let us make mankind in our image, in our likeness, so that they may rule over the fish in the sea and the birds in the sky, over the livestock and all the wild animals, and over all the creatures that move along the ground.’ 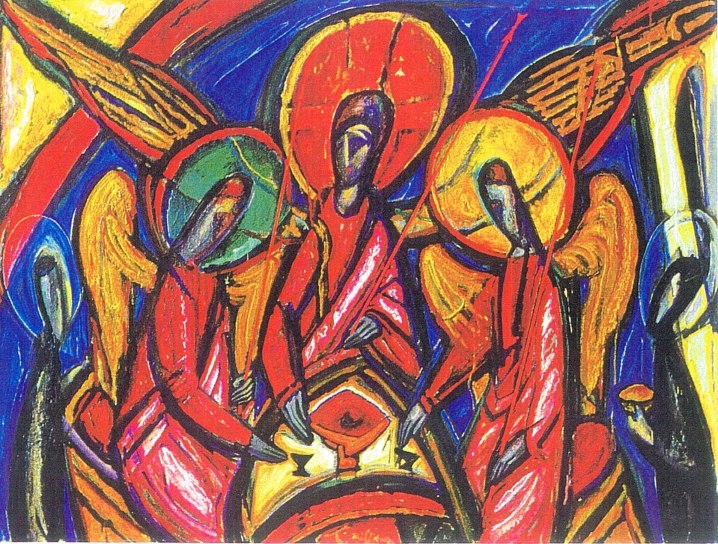 In the wake of the deaths of Ahmaud Arbery, Breonna Taylor, and George Floyd (reigniting the tragic memory of so many others), in the wake of a global pandemic preying on marginalized communities and vulnerable individuals– Christians have had ample opportunity to re-assert the central Biblical truth that every person is created in the image of God.  But what are we saying when we say that all people bear the imago Dei?  This is a question with a long, complex, and sometimes lamentable history, but remembering that we just celebrated Trinity Sunday, I would like to hone-in on one aspect of the imago Dei that seems particularly crucial to remember as we continue in a season of protesting, isolating, and praying.

For centuries, Christian thought regarding the image of God was dominated by what theologians call a “substantive” view of the imago Dei.  In this view, to be created in God’s image means that we share some concrete attribute or capability with our Creator.  Many theologians, from Augustine to Aquinas, argued that this attribute was human rationality, which they construed in a variety of ways.  Back in patristic and medieval times, “rationality” meant something like the capacity to identify and choose that which is our highest Good; in other words, to be created in the image of God means we are able to align our lives with what is really real, to choose to follow and worship God.

Over the course of the Enlightenment, however, the concept of human reason shifted from the ability to select the highest good (traditionally God), to the capacity to rightly perceive and judge reality.  We shifted from having the capacity to align ourselves with a reality that was there before us, to possessing the ability to rightly judge where reality starts and stops completely on our own.  Over time, the image of God became conflated with this uniquely European vision of human intellect and reason.  Peoples who did not perceive the world through this narrow lens were all-too-easily dismissed as less-than-full image-bearers.  Tragically, we know all-too-well the consequences of this distorted theological anthropology: slavery, eugenics, Holocaust, Jim Crow, etc., etc.  The justifications that enabled these evils to come about and persist have their roots in Christian theology, and the church should be the first to lament and repent whenever fresh evidence of this distortion arises.

And yet, the church should also take heart, because– in this very concept of the imago Dei– it also possesses the sharpest scalpel by which to remove the malignant anthropology described above and its deadly effects.  Theologian Colin Gunton, in his book The One, the Three, and the Many, takes great pains to remind us that, when we say that we are created in the image of God, we are also saying that we are made in the image of the Trinity.  Where the intellectual image of God locates the center of all meaning-making and truth-determining in the individual human mind, by emphasizing that we are made in the image of a triune God, we are reminded that relationality is knit into us at every level of our existence.  We cannot know ourselves– or God, or what is really real about the world around us– by ourselves.  Just as God is three-in-one, relationship-in-unity, so too must we see ourselves as intrinsically relational.  Gunton calls this being “mutually constitutive”– being made up (constituted) by and for one another.  I might feel that I am a rational, autonomous, self-contained, and self-determining individual with the ability to accurately see and judge reality.  But when I remember that I am made in the image of the Trinity, I remember I inhabit a porous existence, fundamentally open to and enmeshed in the lives, cultures, and creation surrounding me.

Our own experience over the past months even bears out how enmeshed we truly are with one another.  One potential explanation for why the United States has fared so poorly in our collective response to the coronavirus could be that our entire concept of “normalcy” is premised upon the Enlightenment vision of the self as fundamentally independent and (as much as possible) free from external constraints.  Something deep inside us resists any calls to cede our individual autonomy, even when we know doing so is for the greater good.  As we confront once again the racial wounds running deep through our country’s history and present, we have the opportunity to remember those who continue to make the case that personal and systemic racism hurts all people, even those of us who might seem to have the most to gain through privilege.

The many-ness of the Trinity does not necessitate competition between the Father, Son, and Spirit but fosters a context of endless collaboration, creativity, and support.  If we take seriously being created in the imago Trinitatis, we will have the resources to reject the prevalent idea that competition forms the foundation of our relationships with one another and the rest of creation (something about which Marilynne Robinson has recently written extensively); our work for the “common good” never necessitates a zero-sum game.  This is a moment where the church is uniquely poised to embody and work for a vision of holistic shalom or flourishing that looks more and more like the vibrant, living love of the Trinity who made us in his image.

May our faithfulness to God the Father– in protest, in prayer, in neighborliness-amidst-isolation– be awed by the miraculous pattern of love exhibited in His Son and inspired to creative, unifying action by His Spirit.

Share this post
← Resources for Racial Healing & Justice An Open Letter to White Christians: The Most Important Thing We Can Do Right Now →