SOUNDINGS – There’s Something About Mary

SOUNDINGS – There’s Something About Mary

In my home growing up, Roman Catholics were perceived as being about as Christian as Muslims if not worse, and they (and they were a “they”) were even more dangerous than Episcopalians.  There were lots of spiritual practices, theological ideas, and devotional acts that were simply off limits and left unexplored for the simple reason that they were “too Catholic”.

She, being elevated so highly in the Catholic tradition, was relegated to near obscurity in our conservative Protestant tradition.  Mary, it seemed, was too Catholic, and speaking too much of her was to get near a dangerous line and to speak too highly of her was to cross it.   She remained a minor figure in the Christmas story (not the Advent story, mind you, Advent was too Catholic).

It wasn’t until my late 20s that I began to explore her more deeply and look at her more closely, and allow for the possibility that, to borrow the title from a film, there’s something about Mary.

In talking to my spiritual director about it, among the other things Father James said was, “Jesus loved his mother.  Don’t you want to love who Jesus loved?”  Over the years, I have indeed come to love Mary, variously titled “The First Christian” and “The First Apostle” and “Theotokos: the God-bearer” and of course nothing less than “Holy Mary, Mother of God”.

Early on in that journey I wrote a poem… 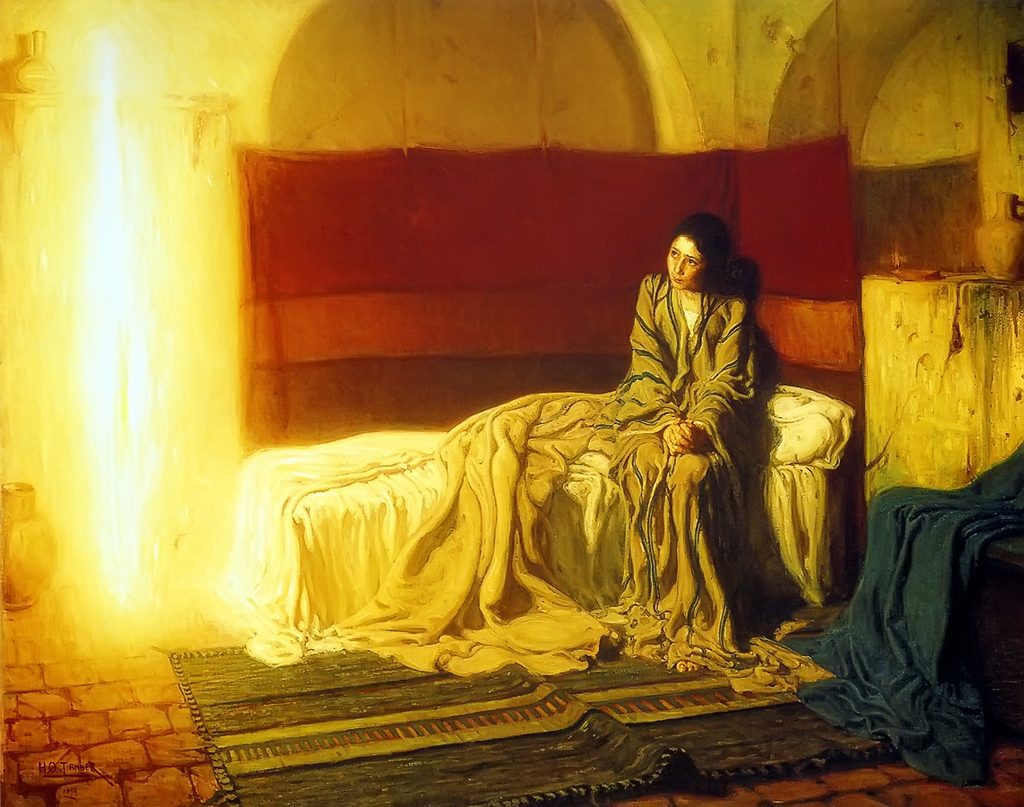 “The Annunciation” by Henry Ossawa Tanner (1898)

Sweet Mary, I never knew you.
Engines of fear by control overlaid
Have kept you hidden from our spiritual view.

Do you speak?  Do you watch the play of our lives?
Do you weep at the foot of our cross?
Surely you of all mothers can relate to loss.

Your son a prodigal.
Your son killed.
Your son raised  (My God!)
with double joy returned
Then gone,
the third divorce.

You, mother of God, knew pain
For you knew love so deep
And watched it sleep
In your arms.

Pray for me, Mary.

Of all who, the breadth and depth of life, may see,
It is you who could, if you can,
Beseech intelligently.

The sentiment of this poem is simple… If you can hear me, Mary, and can indeed pray for us, well, it can’t hurt to ask you to do it!  Over the years, Jesus still gets 99.5% of my petitions.  The .5% is pretty sweet though when I’m led to do it.

Here are four resources that can help you engage Mary perhaps more deeply than you have and be blessed by the richness of her life and witness.

The first is the best one.  Tara gave this talk some years ago, and it remains in my opinion (no bias whatsoever!) one of the best introductions to Mary for Protestant ears, and will bless Catholics as well.  About a year and a half later, we named our youngest daughter Maira, one of the Gaelic names for, well, you guessed it…

Scot McKnight’s book “The Real Mary: Why Evangelical Christians Can Embrace the Mother of Jesus” is fabulous, simple and very accessible.

This recent article in Christianity Today “The First Christian” is quite a good overview of Mary’s life and impact beyond the manger scene.

And then in 2016 I was grateful to be able to preach a little bit about Mary at The Falls Church Anglican, and I have provided an excerpt below.

I’ll give Martin Luther* the last word, from a sermon he gave at Christmas in 1531:  “Mary is the highest woman and the noblest gem in Christianity after Christ… She is nobility, wisdom, and holiness personified. We can never honor her enough. Still honor and praise must be given to her in such a way as to injure neither Christ nor the Scriptures.”

Like Mary did oh so many years ago, let’s keep giving God our “Yes” this Advent season!

*More on Luther and Mary here.  He was a fan.

There are lots of surprises all around Jesus’ birth, and that part about the savior being born to a virgin is certainly one of the biggest. We just heard Mary’s song read from the Bible, from the book of Luke. Luke was a doctor, and as such he was concerned about the facts, simply telling it the way that it is, and he wanted to write down the accurate story of the birth of Jesus, just as it happened. For obvious reasons, Mary gets a lot of press.

Here she is, a simple, humble, peasant girl living in the middle of nowhere in a time when that really meant you were in the middle of nowhere. She’s a young teenager, maybe 13 or 14. An angel shows up to her and says, “Mary, (a) you’re going to have a son, and (b) that boy is going to be the Son of God and King of all things forever, and (c) this is all going to happen before you are intimate with any man.” And Mary simply says, “Well, I don’t understand all that, but I trust you…OK…OK…I’m in.” “Be it done to me according to thy word,” she said. And Mary’s “Yes” changed the world, even though she didn’t understand it all. She just said yes. She just had faith. And with her faith in God came great joy!

And then she keeps on going, and her words tell us a lot about who God is and what God does. This passage is known as Mary’s song, her “Magnificat,” but it is actually about God. If you look at it you can see it. We learn all these things about God here in seven verses. God is holy, which simply means he is other, he is not like people. God saves, he’s mighty, he’s merciful, he’s strong. God pays attention to the lowly and fights for the needy, he doesn’t go along with the powerful but he humbles them. God speaks, God helps, and he’s faithful—faithful to promises he made even centuries earlier. This is the God who noticed a young girl no one else would notice, and he filled her with joy, a virgin girl who found herself pregnant. And Mary did give birth to a son, and she did call his name Jesus, and the world has literally never been the same, for which we can be most grateful.

“SOUNDINGS” posts are aimed at considering together topics that are important for our society, for the Church, and for our own spiritual journeys. To ‘take a sounding’ is a nautical term about using depth to determine where you are and where you’re going.  These writings are designed to do just that. Please share this post with friends you think might appreciate it. If you would like to get SOUNDINGS posts from me sent directly to your inbox, click here.