A Pilgrim’s Mass: Walking the Camino in 2019

A Pilgrim’s Mass: Walking the Camino in 2019

We’ve just finished another Coracle pilgrimage on the Camino de Santiago de Compostela in Spain.  This time, we walked along the Camino Portuguese using the Coastal Route option. It leads you for two days right along the ocean in northwestern Spain, with unparalleled views of the rocky coast and blue waters.

Our paths were different this time, and so was the overall feel of the trip. It was a Camino walk marked, from the start, with suffering.  While this is only the second time I have walked on these paths with a group of people, I know that something very particular draws Christians to the Camino.  And within our group, there were those who carried with them anger, all of us who carried the suffering of some people in our lives through our little exercise of “sorrow stones” or the carrying of intentions, those who had experienced trauma in some for or another, those who had recently lost someone close to them in their lives, and so many other pieces of stories that needed more time to be unwound and examined along the 80+ miles and 6 days in front of us.

In August, it is prime Camino season. Hoards of people gather in groups from 1 to 50 and walk together for days, weeks, and sometimes even months.  It was amongst these faithful journeyers that our little group of 8 found ourselves. We were supposed to be 9 but in early July, one of our number got a bad health diagnosis and was unable to join us at the last minute.  She was very present on all of our hearts as we walked. Each day, we woke early and started walking just after the sun came up. Though it is August, the temperatures were lovely thanks to the nearby Atlantic ocean. Our first two days were temperate, sunny, and beautiful.  The first day, we kept directly along the coast, walking past busy beaches, full of summer high-season beachgoers, enjoying holidays and time with family and friends. It was crowded and hot and the sun was beating down on us. It was also our longest day of walking and the 17 miles we went that day were long.

Given the fact that we were all hoping for space, this Camino was much more crowded and busy than the one we completed in a different season on a less traveled pathway.  There were very few moments where you might find yourself alone for any extended period of time, and more often there were large groups all around. You might say we were all traveling “en masse”.

My steady companion in the morning, besides the wonderful pilgrims forming our group, was a contemporary setting of sacred music by a Norwegian composer, Ola Gjeilo, with all five standard pieces of a mass – the Kyrie, Gloria, Credo, Sanctus, and the Agnus Dei. As I listened to this quiet, ethereal music flow along with the lush, green Galician countryside, many moments were interrupted by squawking Geese, crying children, yelling teenagers, blaring speakers playing loudly for everyone in earshot, and generally animated conversations between groups also along the way.  This setting of the ordinary mass proved a grace time and time again. 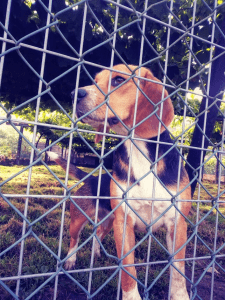 Our group walked in silence every morning for the first half of the day.  But the silence was ours alone to keep, it was not the world’s to keep. Each day we worked against our environments and surroundings, and even ourselves, to quiet our souls and minds and listen to what God might be saying to us. One morning, particularly hoping for stillness and enjoying the middle part of the mass, getting to the Sanctus, a pack of boisterous beagles in the yard of a farm we were passing started howling.  Long, sustained, LOUDLY howling, and every member of that pack of dogs joined with their off-key chorus. As I grumbled at them for ruining my beautiful moment and making me not able to hear the heavenly music in my ears, the chorus rose from the song, “Sanctus….Sanctus…Sanctus”. And it was so clear to me that God was telling me that even this boisterous beagles were his, and as such, they are holy too. The long file of pilgrims from a parochial school outside of Madrid carrying a cross and loudly singing all around me as they pass me, or as I passed them, they are holy too.  Sanctus. And then the Agnus Dei. Lamb of God, who took away the sins of the world. He did it for them as much as he did it for any of these people around me. There is no one exempt from the reach of the Lamb of God.

In this mass of pilgrims, in the middle of the mass itself, reaching its climax, Jesus reminded me once again of the universal salvation offered to each person, and helped draw me out of my little individual corner of my faith, and draw me back into community around me by helping me see and hear what he had already put in my path.

Many in our group experienced similar stories of God speaking to them either through music or through other people, or through things they saw and smelled. What I’ve shared with you is just one unique perspective on the way that God drew me out of myself, but also walked with me through inner pathways he wanted to help me tend to as well.  To a person, each of us experienced the loving presence of God along The Way, and we were blessed by our time together. Stay tuned for more pictures and stories coming soon! Thanks for being with us, as always, on the journey.

P.S.– A few days later, I did find myself completely alone early one morning, listening to the same album of mass music as I hiked along a path toward a lake hidden up in the hills.  On the directions for the path, I read that for a time I would follow a “waterway”. And it was a translation from the Portuguese for the word, so I didn’t really know what to expect this waterway to actually be since translation is usually loosely accurate at best in these scenarios.  It turned out to be a canal, likely built by slaves on sugar plantations in the Azores in the 18th century. I have seen others like it in different locations, but with a similar colonial history. They used them to more easily transfer heavier materials back and forth, rather than dragging them up steep, slippery tropical slopes.  They would use the water to gently carry their items further along the way for them.

And again, the mass filled in what I needed to hear, “Agnus Dei, qui tollis peccata mundi”. In front of a tangible reminder of a history that much of the world shares of slavery and marginalized peoples, I was reminded of a God who is over it all.  The album ends with a reprise of the Ubi Caritas, reminding us that even after the death and resurrection and redemption of Jesus, where there is Love, there is God also. Always and evermore, Amen.