SOUNDINGS: “What Ever Happened to Lazarus?”

SOUNDINGS: “What Ever Happened to Lazarus?”

In the Orthodox tradition, Lazarus, whose story is chronicled in John 11, has a title:  “Lazarus, The Four-Days Dead.”  Sometimes we call him ‘the man who died twice.’  In that he did die twice, have you ever thought about where his (second) tomb might be?

I hadn’t either until 2018 when I happened to be in Cyprus while working with World Vision and visiting a dear friend.  Lauren gave me a brief tour of the city center of Larnaca, and pointed out St. Lazarus Church where Lazarus’ tomb is said to be.  I realized I’d never really considered that Lazarus would have an actual tomb, or that he would have died twice.  After Jesus raises him from the dead, he pretty much falls out of the gospels, and out of our minds too.  But after his resuscitation, it seems the ministry of Lazarus was just beginning, and it began with an escape.

You’ll remember that after Jesus raised Lazarus from the dead, many Jewish people were coming to believe in Jesus (Jn 11.45).  Because of this, the religious leadership decided to put Jesus to death (11.53).  Jesus went into hiding at Ephraim (modern day Taybeh in Palestine which has many Christians still today).  When Jesus returned to Bethany for his Triumphal Entry, many came to see him, but also to see Lazarus.  “So the chief priests made plans to put Lazarus to death as well, because on account of him many of the Jews were going away and believing in Jesus.” (12.10-11)

The most solid church tradition holds that Lazarus fled to Cyprus, just over 200 miles from the coast of Israel, where there was a large Jewish community.  It is assumed that he met with Paul and Barnabas on their first missionary journey when they traversed the island (Acts 13), and Lazarus became the first Bishop of Kition, then a city-state with its capital at Larnaca, and is said to have died at age 60.  While it had become lost in ensuing centuries under Muslim rule, in 890 AD a tomb was found there bearing the inscription “Lazarus, four days dead, friend of Christ”, and St. Lazarus Church was built on top of it soon thereafter.  It is hardly surprising that Lazarus, having been raised from the dead by Jesus, would give the rest of his life serving Christ and his church.

There’s another question about Lazarus that we rarely ask, namely “What might his personal experience have been like of being raised from the dead?”  How might he have remembered it?  How might he put words to it upon reflection many years later?

Recently on one of my favorite trips of the year**, I spent quite a bit of time in the whole of John 11 and let it inform my imagination.  Give it a read first yourself, and then see my own attempt to capture Lazarus’ point of view below. 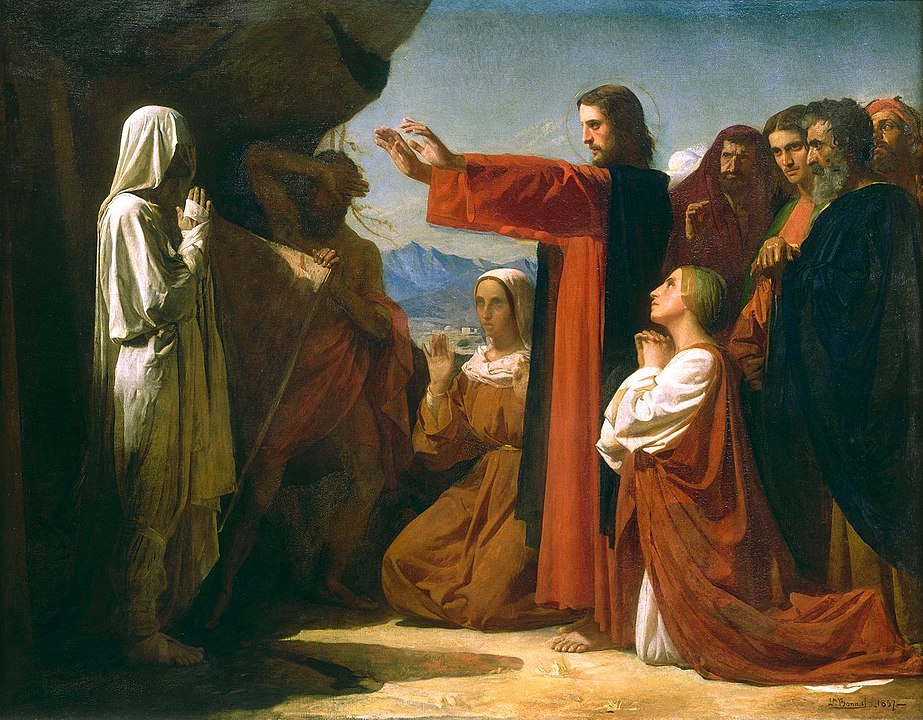 Lazarus Remembers, circa 53 AD from Cyprus

It felt like I was dying, because I was.
The weakness wouldn’t depart, the fevers wouldn’t come down over the course of too many days.  Every bit of water in my body seemed to come out of every pore.
It couldn’t last long like this.  I wouldn’t last long like this.
I don’t know how long it lasted, it began to feel as if it had never been different and would never be different.
All my strength went simply to trying to stay alive, and my strength was failing and the light fading.

My sisters cared for me, they did what they could.  They walked alongside me on a journey that was not yet theirs to take, with worry that changed to fear that would become two broken hearts.  Their tears were muffled and many.
They sensed I was dying, because I was, and there was nothing they could do but try, care, and grieve while keeping brave faces. They did everything until there was only more thing.

Him.
They sent for Jesus.  They sent for him and waited, as by then they could only watch and keep watch, worry, and pray.
They tried to hide their tears from me.
Eventually their attempts to shield me from their grieving fear didn’t matter.
I slipped away from a sense about anything around me, strange visions came to me when I wasn’t sleeping or couldn’t tell, and what little strength was left in me was spent simply in order to breathe.
They had sent for Jesus.
Where was he?
Eventually my mind couldn’t even ask that as my body failed and took everything with it. What few faculties I had diminished.  My very self was ceasing to live, my field of vision becoming more limited with each passing hour.  The black sphere around what I saw when my eyes were open increasingly filled what I could see, the light at the end of a cave moving farther away getting smaller.
Then, one by one it all left me, my thoughts first, then my perceptions, then my very breath.
For me, it was finished.
I died, and was dead.  I died, and was dead.  All went dark, a black so thick that it covered me like a lead cocoon, like it had taken on dense matter, and the darkness covered me, wrapped me fully and tightly as a heavy blanket, like too many swaddling clothes wrapped too many times, but cold.
I slept.

They tell me I’d been dead for four days.

The voice split the thick darkness as lightning strikes across a starless sky.
“Lazarus, come out!” my ears heard.  My body filled with a breath and heaved, and heaved again.  Air came back into my lungs, and I breathed.
Some linen shrouded my face, yet through it I could perceive light at the end of some dark space.  Surrounded by dark stone, all felt cold, and I moved towards the light.
My legs buckled, having not walked for who knows how many days.  My feet stumbled, having been bound, along with my hands unfeeling.
I staggered towards the light, and stepping into it, felt the heat of it.
The voice spoke again, “Unbind him, and let him go.”
Several pairs of hands did that work, my face first.
When they unwrapped my face I opened my eyes, blinded by that great light that at the same time warmed my flesh that had been so cold to the touch.  I had to close my eyes til my eyes could handle their new sight.
They unwrapped my hands, and those I could now see.  I looked at my palms first, then the back of them, turning them slowly.  I moved my fingers, all ten of them, stretching and gripping and stretching and gripping.
My hands, they work!
My hands, they are alive!
I am alive!
They unbound my feet, and I walked slowly.  It had been many days since I had taken my last step, and I took a step.  Arms surrounded me in case I should fall, and I stumbled but did not fall, I staggered but stayed on those feet, and took another step.  I know now what a colt feels like soon after birth.

A figure moved towards me, I couldn’t seem him clearly as the sun was behind him. All was light behind him, even so he seemed to glow, a deeper light than even that which surrounded him.
When his body moved between me and the sun, his head blocked that golden sphere.
I could see his face.
“Jesus!”
It was his voice that called me forth from the grave.  It was his voice that lifted the lead sheet and turned the crypt into a chrysalis.
He came to me with a wide smile, and a face still wet from crying, and a lingering fire still left behind his eyes that just moments before had blazed with indignation.
“Jesus!”
“Lazarus!”
I stumbled towards him and my weak legs gave way.  He caught me in his hands, those same hands whose power lifted me from the dead.
He caught me, and raised me up in his arms.
We embraced, and while I cried, he laughed, and laughed, and cried, and laughed.
We held each other through a mixture of laughter and tears.
“Lazarus.”
“Jesus.”
Deep breaths left our bodies, deep breaths filled our lungs.  He held me, and I him.

He led me to Mary and Martha, their faces wet too, but their eyes wide with wonder, barely believing.  He gave me back to them and let them hold me up.  I held on to them, we didn’t want to let go.  Our love had been restored, because my life had been given back.  When I was dying they called for him and, in his time and for his purposes, he came, and his timing was perfect.

Jesus watched us, without words but with a look that looked like what ancient wisdom might, and slowly backed away and turned down the road.  What he’d done had attracted attention he did not yet want, but his love for me overcame that, a deeper desire won out, love moved him, and many people saw his real power.  From that day on he stayed hidden.

I didn’t know where he was going, but I knew that I would follow him wherever he led me.  Would he call me far west across the ocean, I would go.  He did, and I did.

Before I had loved him, on that day I gave my life to him.
I would tell his story, and mine.

Jesus is the one who brings resurrection.  He did it for me.

“SOUNDINGS” posts consider topics that are important for our society, for the Church, and for our own spiritual journeys.  To ‘take a sounding’ is a nautical term about using depth to determine where you are and where you’re going.  These writings are designed to do just that.  Please share this post with friends you think might appreciate it.  If you would like to get SOUNDINGS posts from me sent directly to your inbox, click here.
Share this post
← “Imagining the Annunciation” with Amy Boucher Pye “Lazarus & Longing for Resurrection” →

Explore the Coracle Fellowship Program – ONLINE or in NoVA/DC – Apply by DEC 15th!