Over twenty years ago, during one of those unhappy times when I was facing some uncertainty about the paths before me and, focused on my own confusion, feeling remote from the Lord’s comforting presence, I came upon this wonderful prayer and hymn attributed to St. Patrick.  According to one account, St. Patrick found himself in a cave surrounded by a druid king and his army of bluish people, intent on Patrick’s death.  After praying this prayer, Patrick was miraculously delivered.

Whether Patrick wrote this poem or not, it was already being quoted in the 8th Century A.D., and has been prayed much and rediscovered in the last century as we have come to a greater appreciation of the Celtic spiritual traditions.  When I read and prayed this prayer I found that it helped me remember Whom I was really talking with when I prayed — and my faith was strengthened.  Of course, whatever particular uncertainty I was facing at the time has long been resolved, in His providence.

The prayer affirms and, as prayer often does, reminds us how wonderful it is that we actually have been given the privilege of engaging with the Lord of all creation.  With all of His power, and wonder, and promise, He is also Immanuel – God with us.

As wonderful as the prayer is, it occurred to me that it would help my faith if I could confirm that these many wonderful and even outrageous affirmations about the Lord’s abiding power and presence in our lives could actually be found in scripture.  So I searched, and was overwhelmed by the clear biblical warrant for every one of these promises:  the Lord has – incredibly – made Himself available to and for us, with great power, purposed by Him since the beginning of time.

I humbly share, then, this annotated version St. Patrick’s Breastplate.  Over the years I have returned to it and repeatedly been much encouraged by the prayer itself, and even more as I looked up and meditated on the scriptural references. I am sure that any reader would find many more scriptural references, and I encourage you to do so, to enjoy more deeply the promises, and the presence, of the Lord – which He has accomplished for us. 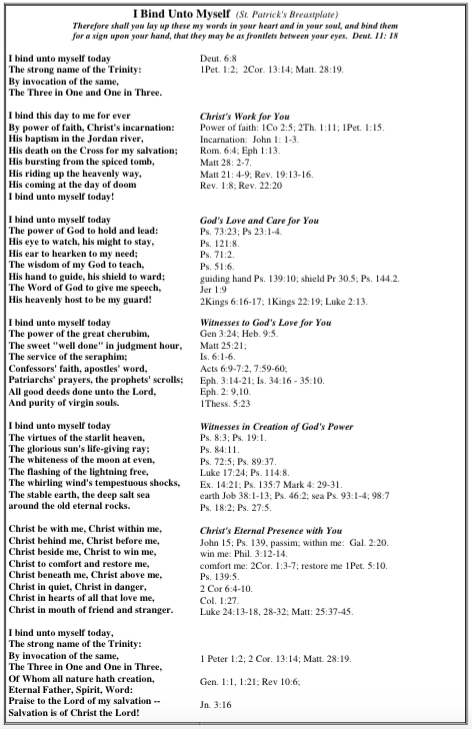 Share this post
← The Beauty of the Lenten Desert "How Does God See Me?" with Dave Bonselaar →