“Waiting patiently in expectation is the foundation of the spiritual life.”

I’ve been sitting with the above quotation in this Advent season.  “Waiting patiently in expectation.”  It’s so simple and accessible, and yet what could be more difficult to live by?

There are many other ways to wait, of course.  At one extreme, we’ve all seen (and been!) a child waiting for something with such excited single-mindedness that it seems they might burst, and they can’t pay attention to anything else.  On the other hand, recall a season where, tired of waiting, you (un)consciously started filling all your time to distract from the waiting — such that when the awaited thing happened, you’d almost forgotten you were waiting for it.

I wonder:  how has your experience of waiting been this Advent season?

I’ve spent a lot of this Advent season with the shepherds who were singled out to hear God’s glorious birth announcement in Luke 2:8-20 (The Message):

8-12 There were shepherds camping in the neighborhood.  They had set night watches over their sheep.  Suddenly, God’s angel stood among them and God’s glory blazed around them.  They were terrified.  The angel said, “Don’t be afraid.  I’m here to announce a great and joyful event that is meant for everybody, worldwide:  A Savior has just been born in David’s town, a Savior who is Messiah and Master.  This is what you’re to look for:  a baby wrapped in a blanket and lying in a manger.”

13-14 At once the angel was joined by a huge angelic choir singing God’s praises:

Glory to God in the heavenly heights,
Peace to all men and women on earth who please him.

15-18 As the angel choir withdrew into heaven, the shepherds talked it over.  “Let’s get over to Bethlehem as fast as we can and see for ourselves what God has revealed to us.”  They left, running, and found Mary and Joseph, and the baby lying in the manger.  Seeing was believing.  They told everyone they met what the angels had said about this child.  All who heard the shepherds were impressed.

19-20 Mary kept all these things to herself, holding them dear, deep within herself.  The shepherds returned and let loose, glorifying and praising God for everything they had heard and seen.  It turned out exactly the way they’d been told! 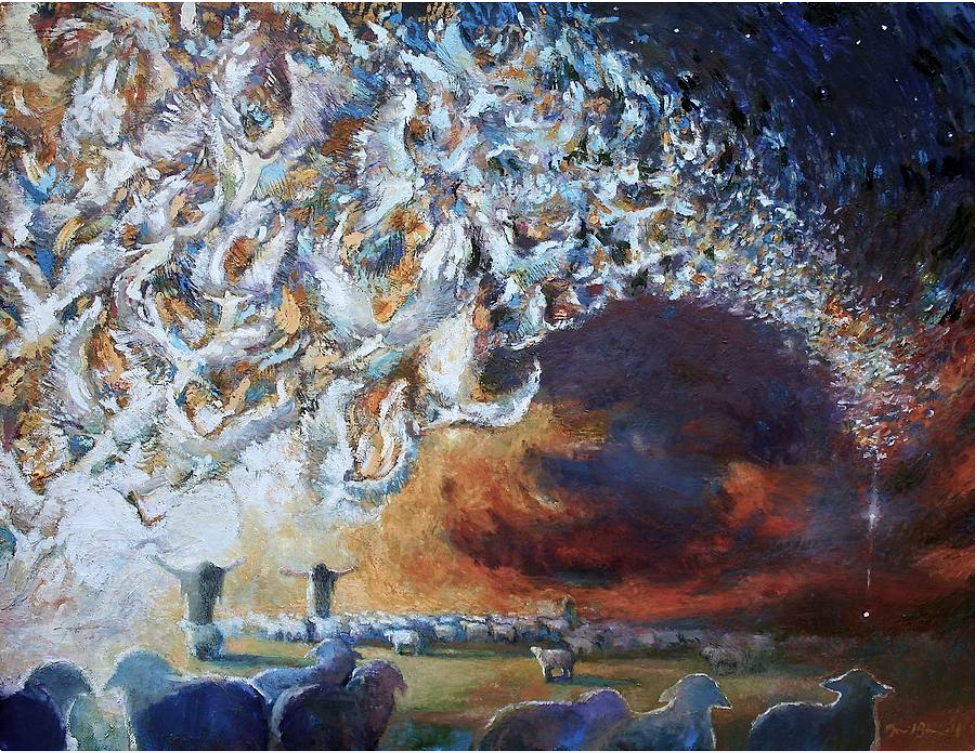 In many ways, we are like the Shepherds.  We probably wouldn’t be seeking God if we hadn’t heard good news that captivated us; if we hadn’t had that one moment where we experienced the loving Presence of Jesus so palpably that we knew we had seen the face of God; if we hadn’t had just one, solitary “angel” single us out and open our eyes to the sweeping angelic choir, singing God’s praises.

And after that moment of being “marked,” like a sheep with its ear distinctively marked by its shepherd, we have a deep and abiding sense that everything is different, that somehow all will be made new, that we are in good hands, that we have hope.  We have something to share and something to rejoice about.

But what happened to these shepherds after that wonderful night?  How did their lives change?
It doesn’t seem likely that they were able to keep tabs on little Jesus.  Did they ask Mary and Joseph where they would be going after they left Bethlehem?
Even if they did, they had their flocks to take care of.  So did they just go back to life as normal?

I realized for the first time this year that most, if not all, of the shepherds would have passed away by the time Jesus started his public ministry at 30 years old; the average life expectancy was a mere 35 years at that time.

So when the angelic fireworks of that night were over; when they still had to go out into the cold night and sleep with the sheep; when life stayed more or less the same in the day to day — did it feel like God was with them?
Did they live knowing their Messiah was near… when they were still oppressed by the Romans and treated as outcasts by their own people?
Did their joy turn into bitter longing when, as they neared the time of their death, the world hadn’t been turned upside down the way they’d hoped?

I’d like to think that those shepherds talked about that night every day after that, that they often pondered that night in their hearts, like we know Mary did.  But Mary got to see Jesus grow up, firsthand.  As the memory faded, maybe, like the disciples, some of the shepherds believed and others doubted?  I wonder.

Friends, we’ve all been marked, been chosen, to taste and see the goodness of the Lord.  Perhaps it feels like Jesus is with you now, but still a baby:  a glimpse of salvation to come, but not yet your full-grown Savior.  And so you wait, with the shepherds.

Is it enough to see the baby Jesus and have this assurance in our souls?  Is it enough to rest in God, like Jesus rested on Mary’s lap?  By God’s grace, I pray and I know it was enough for the shepherds, and that it is enough for us.

So let us wait without fear, and if the joy of this week gives way to grief, let us approach the throne of grace with boldness, knowing that our Savior approaches us all the more boldly, and all the more gently, now, five minutes from now, tomorrow, and every day until he comes again.  Amen.