Then Jesus went with them to a place called Gethsemane, and he said to his disciples, “Sit here, while I go over there and pray.”  And taking with him Peter and the two sons of Zebedee, he began to be sorrowful and troubled.  Then he said to them, “My soul is very sorrowful, even to death; remain here, and watch with me.”  And going a little farther he fell on his face and prayed, saying, “My Father, if it be possible, let this cup pass from me; nevertheless, not as I will, but as you will.”  And he came to the disciples and found them sleeping.  And he said to Peter, “So, could you not watch with me one hour?  Watch and pray that you may not enter into temptation.  The spirit indeed is willing, but the flesh is weak.”  Again, for the second time, he went away and prayed, “My Father, if this cannot pass unless I drink it, your will be done.”  And again he came and found them sleeping, for their eyes were heavy.  So, leaving them again, he went away and prayed for the third time, saying the same words again.  Then he came to the disciples and said to them, “Sleep and take your rest later on.  See, the hour is at hand, and the Son of Man is betrayed into the hands of sinners.  Rise, let us be going; see, my betrayer is at hand.” 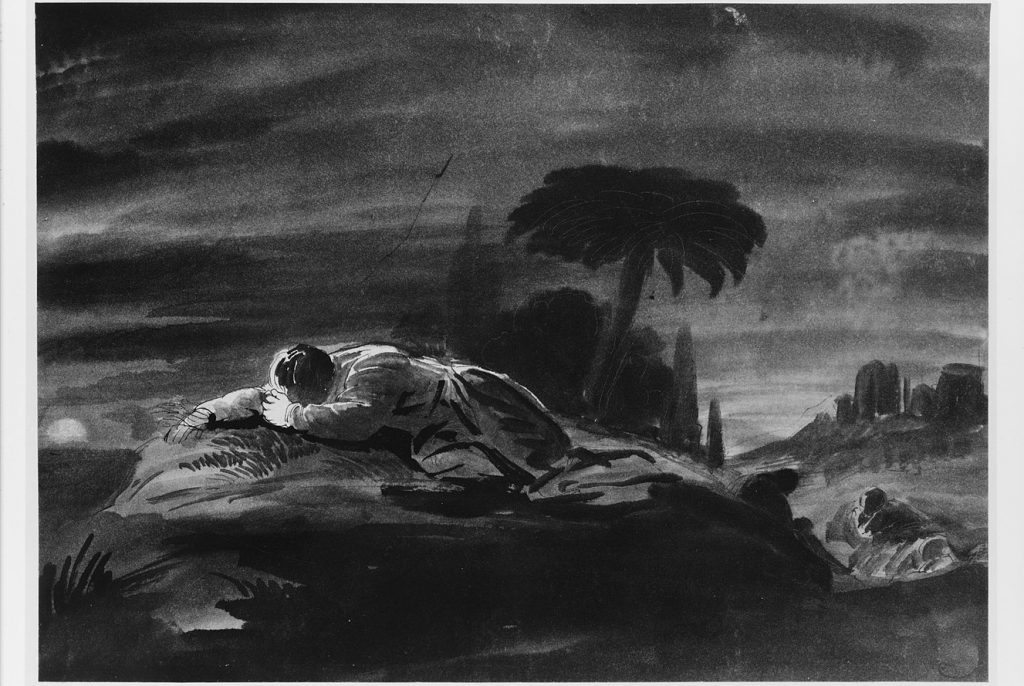 Over years I’ve had the chance to go quite a few times to the Holy Land.  Every place where Jesus was has deep meaning.  A couple of places meet me with a special power each time.  One of them is the Garden of Gethsemane in Jerusalem.  It is a place where the true humanity of Jesus is revealed and so also is his depth of love for us and his absolute faith in his Father’s wisdom and power.

Jesus didn’t have to go the distance to crucifixion.  At Gethsemane, when Peter draws a sword and strikes one of the men who had come to arrest Jesus, Jesus’ response is “Do you think that I cannot appeal to my Father, and he will at once send me more than twelve legions of angels?” (Mt 26.53)   In other words, ‘if I want to be protected from this, I can be and my Father will do it if I ask him.’  It seems even the Father would have protected his Son from the cross if Jesus had asked it of him.

If in Gethsemane we see that Jesus didn’t have to go all the way to the cross, we also see in Gethsemane that, on one level, Jesus didn’t want to be crucified either.  Also in Matthew 26, “My Father, if it be possible, let this cup pass from me.”  He asks this of the Father three times.  Why didn’t Jesus want to do this and have this done to him?  Because crucifixion was awful.  He knew what was coming.  He was so ‘sorrowful and troubled’ that he sweated drops of blood.  Jesus was afraid.  Any true human being in their right mind would be.

And so, in the Garden we encounter a Jesus who wished that there was any other way to achieve a restored union between God and humankind and who could have stopped the whole affair with one request.  There wasn’t and he didn’t.  Here in the Garden we see Jesus, who had a real free will, choose very clearly to take the path he feared, all the way.  After asking the question of his Father three times, Jesus’ conclusion and submission is the same.  “Not as I will, but as you will” and “Your will be done.”

First, Because Jesus loves us.  That’s it.  It’s that simple.  Jesus loves every person God has made and loves the whole world that God has made, and this was the only path by which every person could be enabled to gain an intimate relationship with God the Son and God the Father and for the world to begin the long process of being made new and made whole.  This is the deep essence of John 17.  Jesus wants to be with us and wants us to be with Him and the Father, in deep union.  Jesus wants intimacy with us.

And second, Jesus did what he didn’t have to do, did what he was afraid to do, because he loved and trusted his Father and knew the love of his Father.  This is also the deep essence of John 17.  It is amazing to me the leap of trust that Jesus took into the tomb, believing that his Father would indeed raise him out of the grave to new life.  And that’s exactly what happened.

Oh yes, Jesus was truly human.  At his resurrection, it is displayed and vindicated that he is also truly divine.

And so, as we move through Holy Week, with its many familiar scenes and stories revolving around the life and death and new life of our Lord, I would encourage us to remember the primary lens through which to view it all.  Behold, the love of Jesus for each one of us!  And behold, the faithfulness and wisdom and power and glory of God the Father!

It’s a good way to listen to each one of the stories at each stage of Holy Week, asking ourselves these questions of each passage and reading:

May you have a blessed, rich, and meaningful Holy Week,

PS:  This graphic chronology of the last week of Jesus’ earthly life is really interesting and helpful.  You may want to consult it throughout the week to hold together who was doing what when during Holy Week.  Thanks to Biblegateway.

Artword: Jesus in the Garden of Gethsemane by Robert Walter Weir