For the World, Pilgrimage

The Book of Acts in the Himalayas

The Book of Acts in the Himalayas

It didn’t take long to realize it.   It was after witnessing the prayer and fasting, and hearing story after story of the same.   And then hearing testimonies of people who had come to believe in Jesus because they saw a loved one healed after prayers in his name.   And then realizing just how threatening Christianity is to the social order and caste system of Nepal.  And hearing more stories of people being rejected by their families after believing Jesus.  And meeting several older Christians who have spent many years walking from village to village preaching the Gospel and planting churches.

It dawned on me, “Oh my gosh, this church is living the book of Acts, in real time!”

And it makes sense.  It is a very, very young church.  Christianity arrived via Tibet through Roman Catholic missionaries coming from China in the mid-1600s, and made many converts over the decades.  But then in 1760 the King of Nepal banished any Christian from the land, imprisoned others, and martyred the priests and pastors, any remaining Christians fled, and Nepal become a closed kingdom to most foreigners and any missionaries.   There wasn’t a known Christian in Nepal from that time until 1952.  1952!   That was the year the first modern Nepali convert is recorded.

By the mid-1970s there were only 100 or so known Christians, amidst great persecution, and in the early ‘80s there were three small churches, and in 1989 six pastors were jailed or deported.  Meanwhile there were several Nepali Christians walking from village to village, preaching the gospel, healing, praying, and planting churches.   Democracy came in 1999, and with it, greater religious freedom, especially after the tumult of the Maoist uprisings and abolition of Nepal’s monarchy. Since the early 2000s the church has been growing rapidly, in part because of new constitution making Nepal officially a secular state versus a Hindu one.  It is new and fertile soil for the spread of the Gospel here. 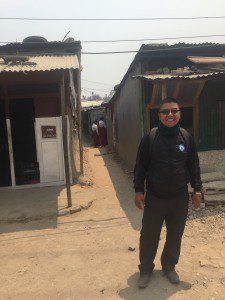 Pastor Daniel of the Anglican church at the Jagaran slum community

We visited the Anglican church in the Jagaran slum community in Kathmandu.  The slum was created in 2006, Pastor Daniel came in 2007, and now more than 40% of the households there are Christian.

Rev. Rinzi Lama is one of the founding fathers of the church of Nepal, having planted over 50 churches across the country, and several in Kathmandu.  It was he and another, Rev. Shyam Nepali, who discerned in 1999 that the Anglican tradition would be a good one to bring some order to their network of churches, and the Anglican Diocese of Singapore of the Province of Southeast Asia took them on in a response to their desire.   In the one year since the earthquake in April 2015, the membership of this little Nepali Anglican community across the country has grown from 9,000 to 12,000 people!  You usually just don’t see growth like that…again it is reminiscent of the book of Acts.

The church in Nepal is the closest thing I’ve ever seen to Acts in real life.   Remembering that Acts covers a period of time of about 30 years, about the time that church in Nepal has begun to grow.   And laced through Acts we read stories of

That’s Acts, but in just three days here I have heard at least one in each of those categories if not many that have happened in the last 30 years in Nepal, and continue to happen, right now in real time.  It’s breathtaking.  I’m not aware of any place like this in the world right now, with the possible exception of China.  I’m sure there are likely others and I’d love to know about them.
Finding myself in the book of Acts was not what I expected on this trip, nor was it the goal.When the earthquake struck, 30 of the 58 Anglican church buildings were destroyed.   Most of these are in the Dahding Province about 4 hours drive from Kathmandu.  The Diocese of Singapore has been immensely helpful in relief, and the Anglican Church of North America (ACNA) gave over $215,000 to help through the Anglican Relief and Development Fund (ARDF).   Rebuilding the churches will take years, and more importantly are implementing the Anglican church’s plans for leadership development, infrastructure development, and outreach throughout Nepal. 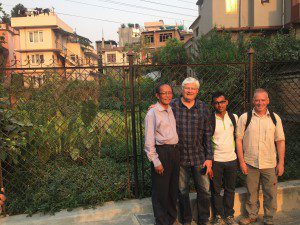 Front left to right: Rev. Rinzi Lama, Bill Deiss, Pushkar Shresthra, and Bill Haley next to what was a three story house that collapsed next to Nazarene Anglican Church

Bill Deiss and I came to lay the groundwork for a new initiative of ARDF in partnership with Coracle.  While members of the ACNA have been so generous with financial support for various projects around the world through our Anglican Communion family, we want to provide a way for people to see the Anglican church in action in such a way that those who go have a powerful, even transforming, spiritual experience, something like a “mission pilgrimage”.

Knowing the short-term needs in Nepal and long-term plans and because of ARDF’s close relationship with the Diocese of Singapore, we felt Nepal would be a good place to make a first offering of this sort of transforming mission.

In 2017, Bill and I hope to come back with a group of people from America to really engage with what is happening here, be as encouraging as we can, and meet God in the mountains.   The general thoughts so far are to spend some time in Kathmandu learning about the country of Nepal and its history, and the history of Christianity here and the Anglican Church.  It’ll sound like Acts.   We will meet and learn from some of the priests and Christians here, and learn about Hinduism and Buddhism by visiting some of the most important religious sites in Kathmandu.   Then we’ll travel to mountains and spend 4 days in Dahding, with our Anglican brothers and sisters there and create space to encounter God in the high places.  We’ll come back to Kathmandu to join in church services here, and then return home, no doubt changed.

We’re calling this mission pilgrimage “Meet God in the Mountains”, and the Gospel of Matthew and the book of Acts will provide the basis for our reflections, and our primary spiritual discipline will be prayer.   Our primary ministry will be to pray with the church of Nepal, and the ministry of presence.   Email Karla Petty if you’re interested in going in 2017, and we’ll keep you posted.

Our hope would be that this would be first of other joint ARDF-Coracle mission pilgrimages, as well as be an important part of a long partnership between ARDF and the Diocese of Singapore and the church in Nepal.

I asked Rinzi Lama what his hope was for the country of Nepal and the church here.  He answered both questions with one hope.  He said “I hope that the darkness of Nepal will be cleansed by the blood of Christ.”   Even in the smallest of ways, it is a profound privilege to be a part of that.   Even in the smallest ways, it is simply other-worldly to know that you’re watching Acts happen again, with your own eyes.