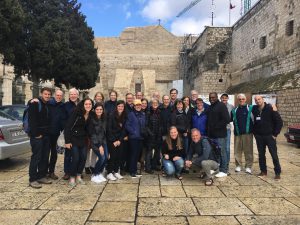 At the beginning of last month, we gathered with many of you to talk about disrupting the status quo of the Israeli-Palestinian conflict. What does it look like to try to understand a reality that can be described by multiple, often mutually exclusive narratives?

A few days ago, Todd and I traveled with twenty four friends from the D.C. area to meet with Roni Keidar on the Gaza border before driving to Tent of Nations to meet with Daoud Nassar. This conflict divides Israelis and Palestinians in so many ways and Roni and Daoud experience this conflict very differently. But despite the asymmetry of their situations and experiences, what struck me meeting with both Roni and Daoud on the same day were the similarities between them as individuals who are making the daily decision to pursue a disruptive, costly way of life. They both live in situations that most would find unsustainable because of the natural human instinct to avoid fear and uncertainty. And both consistently choose to overcome that fear: Roni by remaining in Netiv Ha’asarah on the Gaza border despite rocket alarms driving her and her family into shelters and Daoud by remaining on the land to which his family has legal right despite a decades-long legal battle and frequent hostile attempts to drive him from his home.

It seems that the human capacity to hope should be stretched nearly to breaking for people in the midst of fear and uncertainty. But to borrow a favorite phrase from Todd, hope is different than 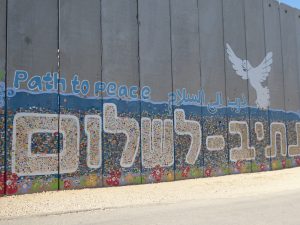 optimism. I don’t know that either Roni or Daoud would describe themselves as especially optimistic. For Roni, though, hope means creating opportunities to establish and deepen relationships with her neighbors in Gaza by waiting at the Erez Crossing to drive Gazans to hospitals and doctor’s appointments in Tel Aviv or Jerusalem, and persistently seeking to understand her neighbors’ stories and lives. For Daoud, hope means cultivating the land and planting trees that will take years to mature and bear fruit, investing in children that will grow to shape the future of Palestine, and refusing to accept the victim identity that he could easily and rightfully claim.

Roni and Daoud are, I’m sure, familiar to those of you who have participated in Telos trips and I don’t want to downplay the critical differences in how they experience life in the midst of conflict. Going on this trip so soon after the gathering in D.C., though, has driven home the significance of Roni’s and Daoud’s daily decisions to remain in the land. Instead of giving in to the forces of conflict that tempt them to accept the status quo and abandon hope, they have daily made the commitment to flourish in this land, to build houses and live in them, to grow their families and plant crops, and to seek the peace and welfare of the land and the people in it. Their method of disrupting the status quo—the remarkable act of making the daily and sometimes hourly decision to refuse to be enemies with their neighbors—opens the door to breaking the cycle of unending violence.