What is a ‘Coracle’?

What is a ‘Coracle’?

“I would love to live like a river flows, carried by the surprise of its own unfolding.” John O’Donohue

Among the many stories of the adventures of the old Celtic Christian pilgrims is this one, from the 9th century.  Landing on an English beach in a boat made of leather and wood and without sail or rudder, three monks presented themselves before King Alfred of Wessex, and offered this explanation of why they had come, “We stole away because we wanted for the love of God to be on pilgrimage, we cared not where.” 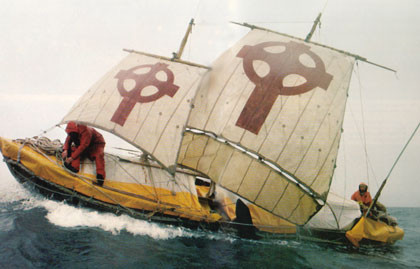 In 1976, Tim Severin crossed the Atlantic in this reproduction coracle. The account can be read in “The Brendan Voyage”

In those ancient days, these pilgrims, called peregrinati, would set out on a journey with God to find God.  Often when they set out on pilgrimage together, they would get into a small leather boat, hoist the sail, pull up the rudder, and go where God took them, by way of the wind.  In those native tongues these small boats are called curraughs; in English they are a ‘coracle,’ a small boat for wide seas.  A coracle is a vehicle to take the journey with God to find God, together.

We love this word ‘coracle.’  It’s a boat, but it speaks of much more—of journey and pilgrimage, risk and wonder, fear and peace, prayer and praise, wild storms and quiet sunsets, the discovery of many things unknown.  And it speaks of a way that people can travel together.  But the coracle, the boat, is not the point, it’s merely the vessel, it only exists so that other things can happen.

Likewise, the point of Coracle as an organization is not to have an organization, but rather to enable many other things to happen, like spiritual formation for kingdom action, and to do that with others who desire that same journey. 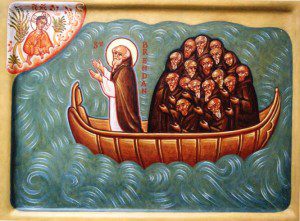 A bronze reproduction of the Kilnaruane Stone in County Cork, Ireland, dating from the 9th century, and likely depicting St. Brendan in his coracle. 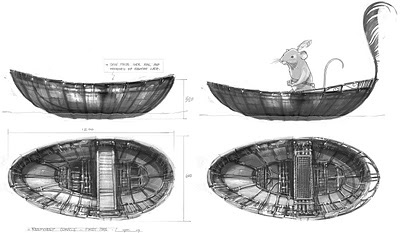 Reepicheep and his coracle from The Voyage of the Dawn Treader by C.S. Lewis