A Christian’s Response in a Polarized Society

A Christian’s Response in a Polarized Society

Father James has been my spiritual director for over 20 years, and my life is unrecognizable without his ministry (see more about that here in “What is Spiritual Direction”).  In a recent session we were talking about the polarized moment our country is living through, and the toll it takes on all of us.  He offered some thoughts about how an individual Christian can take advantage of this season for our own discipleship and formation which I found helpful, as well as the possible positive impact that our own reaction can have around us and in our culture now.  I asked him to write about that for Coracle, and he did.  I encourage you to read his reflections slowly and deeply, and ponder them for your own life in this moment.  Among other insights you’ll find is this one, that “The Lamb conquers by being slain”. 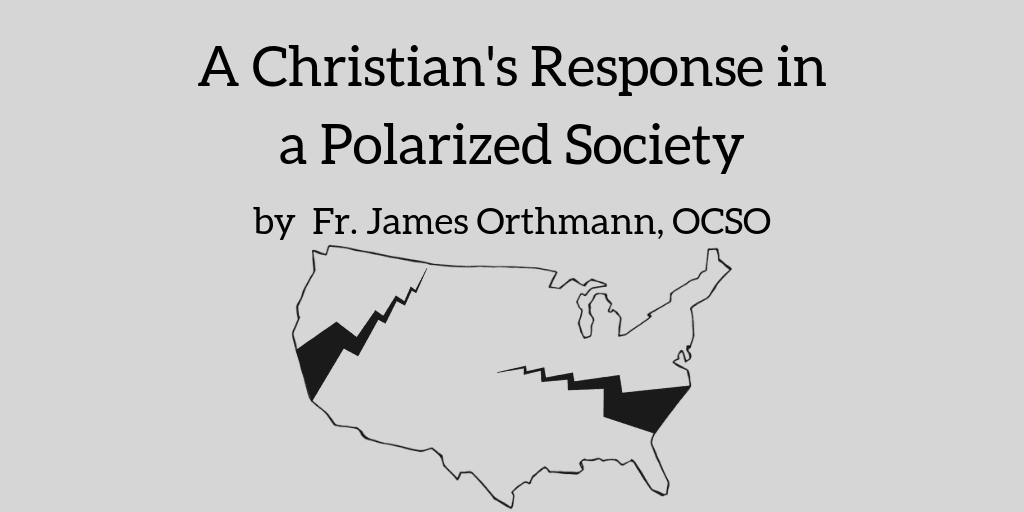 Where to Begin?  Consider What’s Underneath.

I’ve been asked to offer a few reflections on the polarized culture in which we now live. I have no fool-proof antidote to our problems. Anything I would say is conditioned by some forty-two years as a member of a cloistered monastic (specifically Trappist) community. Our vocation hopes, by separating ourselves from society, to gain a disimpassioned perspective on that society. I’m not sure I can claim that entirely in my experience; I’m as troubled as anyone by what I see. But that dynamic of withdrawal, reflection and refusal to flinch from the problems, may actually have something to offer. I hope to offer some suggestions that could create a sacred space from which creative responses could emerge.

From this monastic perspective, the place to begin is within ourselves. I must first look to myself and not to the person or group or policy that outrages me.

What I consider most crucial here is that the problem is not feeling disturbed or outraged nor is the goal recovering my serenity. The first point is to clarify what motivates my reaction.

Thomas Aquinas pointed out that there is an anger which is the vice of violence and, as such, is to be resisted. But there is also an anger which is outrage at injustice and, as such, is a “sub-virtue,” so to speak, of justice; that anger is not to be resisted but directed to an appropriate response. As I said above, the point isn’t to eliminate the discomfort of the anger but to give it its proper name. If it is a virtue, then I must wrestle with how I incarnate it appropriately.

This already implies that I am suspicious of any knee-jerk reactions. I need to tease out how much of my anger is NOT a sub-virtue of justice but a regressive outburst of adolescent rebellion, and as such totally inappropriate to my age. It may even be necessary first to vent that inappropriate reaction to a trusted confidant or counsellor, to self-consciously let it go, even mourn its loss, but to know it for what it is and further learn what help I need to keep it from infecting my responses.

After identifying what is underneath my initial reactions, I need to listen deeply, between the lines, as a psychological analyst or a spiritual guide listens. If I’m listening to myself, I need the help of a trusted confidant; if I’m listening to another, I need to get below the surface of the words and issues. How often do I hear fear and disorientation in the slogans, the tweets, the policies of those I oppose ideologically?  It is common that a rapidly changing culture, which undermines stereotypes and conventions (never deeply explored or understood in the first place), threatens an individual’s presumed place in society. And rarely is that fear acknowledged head-on: admitting my own vulnerability runs counter to our American myth of self-reliance and independence.

The conversation may not be allowed or able to go there. But I can still permit a degree of vulnerability on my part by not being defensive. After all, no slogan, no policy, no thought-out opinion is above criticism or capable of encapsulating perfectly the truth. Not defending myself, but receiving criticism—without being persuaded to the contrary opinion—can help fine-tune my own convictions. Nothing’s lost in such an interchange.

It is important that I don’t depend on my own resources and strength. I need the support and input of other people struggling with the same frustrations. I need the example of other responses. What initiatives are actually working, healing pockets of polarization, bringing people back together? What can I do in my immediate environment that demonstrates an alternative to racism, sexism, intolerance; the lack of transparency or accountability? Are there well-thought out, collective initiatives that might, at the grass-roots or juridical level, improve the situation?

Such initiatives can only be born of genuine discernment, prayer, collaboration and perseverance. There are no quick-fixes. This is a long-term effort which will need a support system to sustain the continued effort through set-backs, adjustments, even compromises. But we need the support to keep the long-term goals in view and to fend off cynicism and despair. If nothing else, keeping core values alive—like guarding the flames of a drafty hearth through a violent storm—is crucial.

An image I return to again and again is the Lamb from the Book of Revelation (Revelation 5:6-14). The Lamb who conquers is the Lamb who has been slain. The Lamb conquers by being slain. What is the difference between the self-sacrifice of the Lamb and defeat? I wager that they feel the same.

I will not offer a theoretical distinction here but invite you to explore the imagery yourself in the crucible of your own experience. The image of course is religious, so it is important here that the context of the act is intentional, self-conscious, perceived as communion with God and supported by prayer and symbolic acts. If nothing else, what can I learn from my defeats?

If and when I approach this current culture of polarization by beginning with myself, I certainly slow-down the reactions—inviting the possibility of responsiveness—but I also assume an enormous responsibility. I may not find identical traits in myself as in those I oppose, but I will find in myself unsavory characteristics that contradict my persona, my conscious ideals. And they then become my responsibility. I can’t ignore, repress or willfully transform them; I must accept and work and wrestle with them, stick with the enterprise, if grace is to enter and transform me. This is a life-long endeavor.

And if I stay with the challenge, it becomes so much easier to dialogue, without defensiveness or feeling threatened, with individuals who hold polar opposite values to my own. This is not a fool-proof strategy, but it can go a long way to breaking down barriers and creating a safe space for meeting another human being, rather than an opponent.

To cultivate the perseverance, strong foundation and courage to proceed in this direction, I need the support of others, their reflection and advice and a deep, developing communion with God through prayer, discernment, sacred reading, study and deep listening.

Monasticism, according to the Rule of Saint Benedict, is built, in part, on a vow of stability, by which a nun or monk is bound to a specific community, in a specific place, for life. That does not imply that they are strong-willed characters capable of such an heroic stunt, but ordinary, fallible people who need to hunker down, with the help of a community, to face and learn the skills to negotiate the challenges of our vocation.

I believe this can be model for all of us, not just monastics. We need more than rugged American individualism to creatively respond to the polarization of our society.