Creation, For the World

The Glorious Demise of Squealy the Pig

The Glorious Demise of Squealy the Pig

It was a cruel thing, perhaps, to do to Liam, our six year old son.   His whole life to that point had been urban, as in, the inner-city of Washington DC.   Living in the broken places of the world and the city had been Tara’s and my past for a long time, and we expected it to be our lifetime.   Then unexpected but not unwelcome, God surprised us with an invitation to move to a small farm in Virginia’s Shenandoah Valley.  And we said Yes.

Just a few days after we moved, the county fair began, with it’s greased pig contest for boys and girls, and we signed Liam up, and dropped him in a ring with about 25 other kids and 10 piglets.  The other kids were wearing John Deere t-shirts and boots, with serious eyes focused on the task, and I’m not sure if Liam had ever seen a pig before, let alone try to catch a slick one, let alone even know how to catch one (by the back legs).   It was happy madness, and of course Liam got no pig, but he did get a strong dose of determination to get one the next year.   We’d practice.   He’d grab my wrist with both hands and I’d shake him and drag him around and he wouldn’t let go.  I was tempted to grease his little sisters and let him have a go, for the sake of the cause.  Tara prevailed.

When the next county fair rolled around, Liam was ready. This time he had his own John Deere t-shirt, his own resolve, he knew what to expect, and I prayed.  It wasn’t long before Liam got his pig, about 45 pounds of muscle and squeal, that he dragged it across the ring and into a pen, and we all erupted in cheers.    And almost immediately our excitement and pride in Liam’s new-found skill turned into a pressing question:  What in the world are we going to do with this pig?   Tara’s a vegetarian, I’m not a big fan of pork.   Pigs grow fast and they grow big, and within just a few months this one would be pushing 250 pounds.  What would we do with him?  Well, all of sudden we had an animal, and what do you do with any animal that comes your way?  You take care of him, because somehow he matters as another one of God’s beautiful acts of creation.

Squealy got a name, a nice little place in our barn to live, good meals every day, lots of straw for bedding, and a little boy with two littler sisters to treat him more like a pet than a product.

We all learned a lot about pigs and some about life.  Liam learned more about responsibility and taking care of living things that had come into your stewardship.  We learned there are good reasons for all the idioms, like “Eats like a pig” or “Smells like a pig” or “Looks like a pig-sty”.  We learned about their intelligence and ingenuity and strength, and that if there’s a hint of weakness in your fence, a pig will find it and exploit it.  And I learned a new term–“market weight”.

When we took God up on his offer to move from the city to the country, and packed up the truck with all our belongings and set out on a very new adventure, we took a deep question with us too.  So much of our life had been focused on living in the city and caring for God’s poor, how’s that supposed to look living on a farm in the country?

Squealy gave us a way.

There’s a organization, with state chapters around the country, called Hunters for the Hungry, with a beautifully simple idea.   Each year, many folks want to hunt deer but don’t want the venison, so they donate their deer to local meat processing plants.   Hunters for the Hungry pays the processing fees and ensures that the venison finds its way to local food banks and churches and feeding programs to be distributed for free to those who have a hard time affording food.

I called the Virginia chapter and asked, “I know you guys deal in deer, but have you ever done something like ‘Hogs for the Hungry’?”   They hadn’t, but were delighted someone was asking.   On the phone we pondered how great it would be if folks who had livestock to offer would be able to donate it throughout the year, and that the fresh meat given around could include options that weren’t so, well, gamey.

It didn’t take long to connect with Gore’s Processing, a local butchery, and set the date when we’d deliver Squealy and then Hunters for the Hungry would pick up the meat and take it not too far to a food bank who had already expressed their excitement for this new sort of donation. 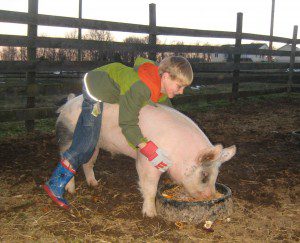 Knowing where Squealy was ultimately going–into the stomachs of people who didn’t have enough food–made it a lot easier for Liam and our daughters to deal with saying goodbye on the day of his glorious demise.   Each of them got to ride Squealy one more time, each of them gave him big hugs and even kisses, we thanked God together for the gift that Squealy had been to us for the few months we’d had him, and the gift he’d be to others.   It was strange, beautiful, deep, and graced.

When the county fair rolls around again in just a few months, Liam will be in the ring again, and this time Iona too, and Karis, and Maira eventually.   They’ll all be ready, they’ll know what to expect, they’ll all have practiced, and Mom and Dad will have prayed!   It just might be Squealy’s legacy could be more piglets caught, and raised with a spirit of glad stewardship, many more hungry folks getting fed, with a lot of fun and good lessons learned along the way.